By Friedrich Kunzmann
October 25, 2017
Sign in to view read count 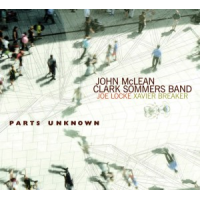 Locke's modernistic "Blondie Roundabout" launches this long player to some speed with a very approachable guitar driven melody followed by short rhythmical interplays arranged in melodic unison. McLean's guitar tone combined with Breakers alternating syncopation and fills create a unique groove, that spreads over most of the following seven tracks. McLean's "Labor Day," similar in compositional structure, features beautiful soloing by both John McLean and Joe Locke. While keeping it short they find most complementary lines.

In "Time Window" the quartet paces it down a little. Introduced by atmospheric electric guitar layering John McLean then takes the acoustic guitar at hand, producing a soft melody. Much like most compositions on this album, Clark Sommers concentrates on creating a meaningful melody with a rather simple harmonic context, giving every member the time and space they need to say what has to be said.

The title track and "All Alone" suggest the group's most modern and most funky approach. Driven by Breakers intense drumming (All Alone sounding much like drum n bass ground work) a wider spectrum is attained by the layering of acoustic and electric guitar in some parts, leading to an even bigger dynamic range. Quieting it down again in order to catch a breath in between those rocking outbursts "Safe and Sound (At the Edge of the Milky Way)" and "Farther From" return to a more acoustic setting where John McLean completely refrains from using the electric guitar.

Closing the album with an acoustic groove McLean's "Last Call" is the most classical jazz composition one would find on this album though at the same time not completely typical in melodic and harmonic construction. At a running time of just under six minutes every member gets one last moment to shine in a mellow and bluesy setting, at times reminiscent of Paul Simon's "Still Crazy After All These Years."

Not only do the originality of the compositions and the flawless and unique performance of the group members make this record a special one, but the production (producer and engineer Vijay Tellis Nayak) emphasizes this perfection by adding more dynamic layers and, rarely but timely, quirky effects. For those who only knew them as sidemen: John McLean and Clark Sommers do have distinct voices of their own and they are ones to be heard.