Drummer, composer and arranger, Xavier Breaker has played with various artists throughout his career including Joe Sample, Randy Crawford, Howard Hewitt, Lalah Hathaway, Ernie Watts, Joey DeFrancesco, Bob Mintzer, Brad Leali, and Jonathan Scales. He has also played for some of Chicago’s finest including Corey Wilkes, Kahil El Zabar, Dee Alexander, Chicago Jazz Orchestra, Chicago Yestet, Sidewalk Chalk, and many others. The Xavier Breaker Coalition was formed in 2013 as an effort to design a group that can thrive in a variety of musical situations. The Coalition opened for many groups, including Brian Auger's Oblivion Express and HBC (Scott Henderson, Jeff Berlin, Dennis Chambers) 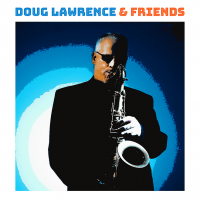 Label: Origin Records
Released: 2021
Track listing: Art of the Messenger; Bird's Word; Ode to the Patient Observer; Across the Ocean; Don't Forget to Ask; Something to Say; Oh; The Owl; Who Cooks for You; Heed the Call; Serenata for Bela.