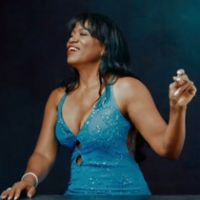 This is an extraordinary singer, songwriter, and a source of a light we are fortunate to experience.
—Reggie Workman, Bassist / NEA Jazz Master

The connection between travel and the discovery and broadening of one’s artistic voice is a consistent theme in the jazz continuum: Louis Armstrong goes up the Mississippi River from New Orleans to Chicago; Charlie Parker goes east from Kansas City to New York; Ornette Coleman moves from Fort Worth to California; and Ray Charles relocates from Florida to Seattle.

The places and spaces the award-winning vocalist/composer/lyricist Eugenie Jones has traveled in the eight years she’s been on the jazz scene cover a wide range of landscapes and longings, from her humble beginnings in West Virginia, to her move to Seattle where—through inspiration and an inexhaustible work ethic—she transformed herself into a jazz vocalist of impeccable taste, with a respect for the jazz tradition and the courage to try something new. Her first two recordings, Black Lace Blue Tears (2013) and Come Out Swingin’ (2015), both feature these attributes.

“From the beginning of this project, I considered how this new CD would be different from the previous ones,” Jones states. That question was satisfied by Jones’s visionary idea to record in each region of the United States with a different set of artists. “It was way beyond anything I’d ever done,” she says. “And while it was a foreboding prospect, once I make up my mind, I’m very tenacious about doing what it takes to achieve my heart’s desire. In many ways this CD is a continuation of my last two recordings in that it only contains songs that truly resonate with me, namely hard-swinging songs, earthy emotive ballads, and uplifting songs of inspiration. These themes are consistent throughout all my recordings.”

Jones’s foray into New York City was a formidable challenge. “New York is massive,” she says. “Massive in terms of its population, its history, its musical legacy, and even in terms of the artists who joined me in the studio. It was mind- blowing to think that here I am in a studio with Reggie Workman and other artists who are absolute demigods, like Bobby Sanabria and Bernard Purdie. I just tried to keep my feet on the ground, and remember that it was my work that got me here.”

With the stellar support of the NEA Jazz Master Reggie Workman, a six-decade veteran who’s played with everybody from John Coltrane to Wayne Shorter; the fiery, Latin Grammy-nominated percussionist Bobby Sanabria; trombonist Julian Priester; pianist James Weidman; the Art Blakey Jazz Messenger bassist Lonnie Plaxico, along with another bassist, Stanley Banks, once a member of George Benson’s ’70s groups; trumpeter Marquis Hill with Israeli-born tenor saxophonist Asaf Even Sur and trombonist Javon Johnson, Jones delivers a delicate potpourri of Big Apple-born numbers, such as Jones’s Latin-tinged “Ultimo Baile en Casa.” The other New York selections include Jones’s “As Long As,” a moving mid- tempo number she wrote for her husband on their wedding day, and the dark yet hopeful cha-cha selection, “Sittin’ at the Bar.”

Workman’s vast connections introduced Jones to bassist and Windy City native Lonnie Plaxico, a onetime member of Art Blakey’s Jazz Messengers who anchored the smooth and swinging Chicago session. Trumpeter Hill came home for the date, with drummer Xavier Breaker and pianist Kevin O’Connell also on board. “These guys were fabulous,” Jones says. “We recorded Irving Berlin’s ‘Blue Skies,’ making the arrangement up on the spot.” Jones and company also offer a steamy, after-hours rendition of another Berlin tune, “You Can Have Him,” and the Jones original “Red Dress,” a syncopated study of how scarlet can reflect the inner workings of a woman.

For the Dallas recordings, Jones teamed with University of North Texas bassist Lynn Seaton, Snarky Puppy keyboardist Shaun Martin, drummer Quincy Davis, and percussionist Jose Aponté. “I was going to Dallas because of a corporate gig,” Jones says, “and a Seattle bass player recommended Lynn Seaton, so I reached out to him. Lynn recommended Quincy Davis. I don’t remember how I got Shaun’s number, but I called and spoke to him and he said he would do [the gig].” Jones and her Texas combo swing Gershwin’s “I Got Rhythm,” contrasted by the leader’s call-to-persevere song, “There Are Thorns,” and her slow 4/4 number, “One More Night to Burn.”

“I’d recorded with a number of these guys previously, so I was basically going back to my roots,” Jones says. “I had done some work with Julian Priester, and I got to know him. …There’s a lot of very talented jazz artists here. And there’s a lot of variation in the styles of jazz that are being performed. There’s also a lot of new blood coming up from the school systems in training.” Jones and her home team accord themselves very well on Billy Strayhorn’s melancholy masterpiece “Multicolored Blue,” Nina Simone’s “Do I Move You,” the quiet-storm cadence of “Skipping Under Starlight,” the anthemic rhythms of “The Gift of Life” (co-written with Peter Adams), and Jones’s song of social significance, “Ey Brother,” which deals with racism, America’s original sin.

On all of her recordings, Jones sings and writes about the myriad inventions and dimensions of love, and other matters of the head and heart. Her clear-as-a-bell diction, ebullient phrasing, and statuesque stage presence did not come from a conservatory, or from an apprenticeship with a big band like many of her predecessors: Her artistry has its roots in her rich family life.

Born and raised in Morgantown, West Virginia, Eugenie Jones grew up with four sisters and three brothers. Her father Eugene was the director of the local Friendship Baptist Church Choir, and her mother was the choir’s lead soprano. She grew up listening to her older siblings’ Motown albums and her parents’ Nancy Wilson and Ray Charles LPs, but in those early years she possessed no latent desire to one day become a singer herself. Jones earned her MBA, married, and moved to Seattle, raising two sons. Her singing career began later in life after the death of her mother, Tommie, in 2008. Jones was inspired to begin singing as a way to carry on a part of her mother, and that quest led her into the Seattle jazz scene and the pursuit of something she had never before imagined— a singing career.

Her woodshedding with local Seattle bands paid off with the release of her 2013 debut CD, Black Lace Blue Tears. Kirk Silsbee’s 3.5-star review of the CD in Down Beat magazine praised Jones for her “rhythm and swinging” and her “unforced lyricism.” The CD was the first vocal release to win the coveted Earshot Jazz NW Recording of the Year award. On the strength of her 2015 follow-up, Come Out Swingin’, Jones ranked in Jazz Week’s top 50, and won the title of NW Vocalist of the Year from Earshot. The CD was lauded in Jazziz magazine for her “smoke-and-satin vocals in settings that float like a butterfly and swing like a night at the Savoy.”

Jones has performed in many venues across the country, including Twins Jazz in Washington, DC, Harlem Late Night Jazz in New York, the Brownstone Jazz in Brooklyn, the Atlanta Jazz Festival, the San Jose Jazz Festival, the Portland Jazz Festival, The Jazz @ 701 Center in Columbia, SC, and Northwest venues such as the Seattle Arts Museum, the Royal Room, and the Earshot Jazz Festival.

In addition to being a singer/songwriter and recording and performing artist, Jones is actively engaged in her community. She serves as the founding Board President of the Music Discover Center, a nonprofit that provides disadvantaged youth with access to music instruction. She is the Executive Producer of the Jackson Street Jazz Walk, an annual block-party community event that commemorates Seattle’s historic African American music history and artists, such as Quincy Jones and Ray Charles, while also raising funds for local nonprofits that feed the hungry and serve the needs of seniors.

As her amazing self-made career shows, Jones is a successful artist on many levels. But importantly, she is a successful African American female entrepreneur, navigating the still male-dominated world of the music industry with equal amounts of nerve and verve. Jones guarantees that she will be a force to be reckoned with for the future shape of jazz to come. “As a lifelong learner in pursuit of being better today than I was yesterday,” she says, “I will always look to answer that internal question of ‘what’s next.’ Toward that end, I’m looking forward to launching a jazz and personal wellness radio spot on WWFM, establishing my own publishing company, and of course, continuing to create and share stories about life through my music.”

Vocalist-Songwriter Eugenie Jones Revels In Variety Both Musical And...

Jones, “has a voice that covers words like pieces of silk covering precious stones. But she never overdoes it, never overflows with emotion, never goes too high or too low, but always sings with a restraint that’s cosmopolitan, yet not soulless. Charles Mundede, Associate Editor, The Stranger, Seattle, WA

From: Players
By Eugenie Jones

From: Come Out Swingin'
By Eugenie Jones

I Could Get Lost In Your Eyes

From: Come Out Swingin'
By Eugenie Jones

All About Jazz musician pages are maintained by musicians, publicists and trusted members like you. Interested? Tell us why you would like to improve the Eugenie Jones musician page.