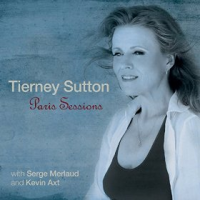 Think you know every aspect of Tierney Sutton's artistic persona? Think again. Hearing the Paris Sessions is to hear Sutton anew. Sure, it's that same one-of-a-kind voice, but there's no Tierney Sutton Band here, incredibly novel arrangements aren't a priority on this one, and there's no grand umbrella theme to contend with. This is simply a captivating listen-by-candlelight album that strikes to the heart of Tierney Sutton.

Paris Sessions is easily the most informal item in Sutton's discography, but the idea of informality shouldn't carry a negative connotation; quite the opposite, in fact. This is a work of unfiltered beauty, successfully pairing vocal temptress with guitar and bass guitar. Two of the numbers recorded at this two day session—"Don't Go To Strangers" and "Answer Me, My Love"—appeared on Sutton's After Blue (BFM Jazz, 2013); the other ten—more standards, some bossa nova detours, and three originals written by Sutton's chief collaborator on this project, guitarist Serge Merlaud —are heard for the first time.

Merlaud is along for this entire ride, an equal partner seated beside the singer. Some brief numbers even cede more than a minute to Merlaud, allowing for proper mood setting and introductions ("You Must Believe In Spring" and "You're Nearer"). Elsewhere, Sutton leads the way, coolly gliding into a scene in inimitable fashion ("Estate"). Seven of the twelve numbers on the program also include the acoustic bass guitar work of Kevin Axt. He provides integral support when holding down the bottom end, but he also takes on the role of rhythm guitarist on several occasions, allowing Sutton and Merlaud to drift along above.

Sometimes it takes the arrival of an album to realize that something was missing in the first place. Such is the case with Paris Sessions. This is the hushed Sutton stunner that the jazz world didn't even know it needed.

You Must Believe In Spring; llm; Don't Go To Strangers; Beija-Flor; You're Nearer; Estate; All Too Soon; Asma; Body And Soul; Izzat; Don't Worry 'Bout Me; Answer Me, My Love.