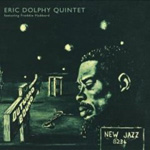 Unlike Ornette Coleman—who wanted to blow orthodox jazz form out of the water—John Coltrane and Eric Dolphy initially worked to change the system from within, making music that fit the jazz standards of the time while injecting their own unique spin. This is why Outward Bound, Dolphy's first recording as a leader, is a not-so-distant relative of Coltrane's My Favorite Things (Atlantic, 1960).

On balance, both discs have a conventional base. While Coltrane stuck to the Great American Songbook, Dolphy penned over half the tunes on Outward Bound; even so, those originals mesh perfectly with classics like "On Green Dolphin Street and Charles Greenlea's "Miss Toni. It's the respective opening tracks that separate both discs from the norm. As Coltrane used an innocuous song from The Sound of Music to launch us into space, so does Dolphy use "G.W. to prove Coleman's theory that "you could play sharp or flat in tune.

A fast 4/4 beat drives borderline-dissonant opening salvos from the front line. While the rest of the band lays down beats and fills that would not be out of place on any bop date, Dolphy steps out of the head to blister us with a mind-boggling, lightning-fingered alto solo that threatens to go over a cliff at any moment. Dolphy and his partners maintain this unorthodox balancing act throughout the 1960 session.

At the time, the bass clarinet was nearly unheard of as a lead instrument, but Dolphy uses it to great atonal effect on the zippy "Miss Toni. It also applies a noir-like patina to the opening of "Green Dolphin Street. Dolphy's flute on Rodgers and Hart's "Glad To Be Unhappy is flat and mournful one second, jumping and dancing (and sometimes screaming) the next, but rarely following a predictable path. Jaki Byard is Dolphy's faithful wingman, contributing Monk-laced lines that stay within "acceptable guidelines while tipping the reality a little bit further out.

George Tucker's foundation on bass is key, rooting the music so the other players can create in space. Roy Haynes displays a range as big as all outdoors, playing drums like a machine gun on the blasting "Les one minute, using brushes like an artist on "Green Dolphin Street the next. Freddie Hubbard's trumpet is as empirical as Dolphy's reedwork is existential; the 21-year old Hubbard's solos (particularly on "Les and the bluesy "245 ) show power and control beyond his years. One wonders what would have happened if he'd stayed with Dolphy and not gone off with Art Blakey.

It makes sad sense we lost Coltrane and Dolphy too soon—Trane from cancer, Dolphy of complications from diabetes. Stars burn out, meteors crash... but while they live, they burn oh so bright. Outward Bound is Dolphy's first burst of light, a beautiful and frightening glow that must be experienced.