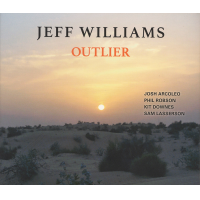 Drummer Jeff Williams is an American expatriate now residing in London, England. Following his formal drumming studies commencing in 1968 at Berklee College of Music, Williams became a seasoned veteran of the U.S. jazz scene, accompanying some of the biggest names in the business including Stan Getz, Joe Lovano, Dave Liebman, Richie Beirach, Cedar Walton, Lee Konitz, Bill Evans, John Scofield, and Miroslav Vitous. Outlier is his third album for Whirlwind and he's assembled a great line-up of British jazz musicians for this date.

The opening title track maintains a plaintive trance-like modal mood throughout with deft interjections from Phil Robson on guitar, Kit Downes on piano and Josh Arcoleo on tenor saxophone. "The Interloper" is quirkier with a definite Monkish feel and appropriate block piano chords with occasional swirls of sound all underpinning Arcoleo's tenor, followed by solos from Downes and Sam Lasserson on bass. But then the mood changes with a comparatively heavier "Dream Visitor," Phil Robson's guitar work is very much to the fore here, most especially when treated with electronic effects, whilst drums and piano provide a powerful backdrop before the theme is taken over by the tenor. Almost at once the tempo slows dramatically whilst still maintaining the heavy feel with a repeated vamp on guitar and electric bass before returning to the original opening riff.

"Meeting A Stranger" is a relaxed ballad with leader Jeff Williams sensitively encouraging the momentum. Kit Downes and Phil Robson turn in fine solos here too. Downes introduces the breezy, medium tempo "New And Old" with solos from Lasserson, Downes and Arcoleo. "Hermeto," the longest track on the album, is Williams' paean to one of his heroes, Hermeto Pascoal. Whilst not imitating Pascoal's compositional style, it possesses its own unique attractiveness, particularly in its opening themes stated alternately by guitar and tenor. The closer, "Oddity" opening with a brief drum foray, is a breezy fast-paced number featuring some vibrant solos from the entire group.

This is a very good album which benefits from Williams' imaginative compositions and the ensemble's excellent musicianship. It's also a grower, so play frequently for a lasting effect.