The Engines: Other Violets 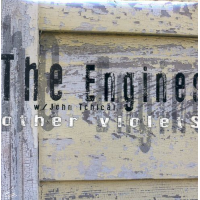 The Chicago-based ensemble's third outing is a dynamic and progressive undertaking, but poignant due to the passing of saxophone legend John Tchicai (Don Cherry, New York Art Quartet, Archie Shepp) who passed away on October 8th, 2012. He joined the unit, making a guest appearance, for this live set recorded on May 15th 2012 at Chicago's Hungry Brain venue.

The core members of the band are among the more prominent exponents of the Windy City's outside jazz realm and input a great degree of artistic flair into these largely, extended pieces. With a focused game-plan, the musicians execute a vastly expressionistic series of improvisational dialogues, but all pieces contain structure, albeit tinged with loose grooves and micro-motifs, elevating the excitement level throughout.

The quintet's broad scope includes a section where drummer Tim Daisy's mallets work across the toms, that offer a rolling-wave like accompaniment to either Tchicai or saxophonist Dave Rempis's oscillating lines on "Gloxinia." However, they shift the momentum during "Cool Copy/Looking," featuring the hornists' bluesy, bop choruses and contrasting tonalities while also reversing the primary theme. Here, and within other regions of sound and scope, the artists intersperse bustling pulses and use building-blocks to up the ante as they punch out garrulous sub-plots amid some rumbling, tumbling, and episodic forays.

At times the ensemble subtly fuses austere classical inferences into the schema, but the improvisational aspects signify a commanding modus operandi. Such is the case on the fast and furious free-bop piece "Planet," as the band draws a simile that could parallel a mass exodus. Indeed, there's a whole lot of goodness taking place on these intricately conceived works that accentuate Tchicai's unassailable impact on the global jazz scene, spanning several decades. He will be deeply missed.