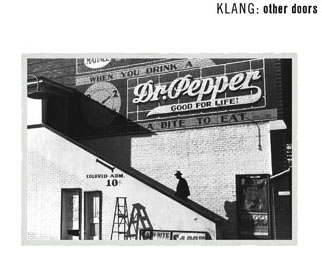 Though he has long admired the small combo recordings of legendary clarinetist Benny Goodman, Chicago-based clarinetist James Falzone never intended to record a tribute to the revered King of Swing. As a former student of modern composition at the New England Conservatory with a strong presence in Chicago's fertile free-improvisation scene, Falzone assumed his youthful gigs playing retro-swing dances were long behind him. An invitation to celebrate the Benny Goodman centennial at the 2009 Chicago Jazz Festival led him to re-investigate Goodman's legacy, which consequently brought to light similarities between the renowned band leader's ideas and his own. Goodman's insistence on racial equality, working with a local community of musicians and petitioning modern classical composers for new works all parallel Falzone's own working methods.

By interpreting hallowed material from a personal viewpoint, rather than mere repertoire, Other Doors embraces the same longstanding concepts jazz musicians have endeavored to explore throughout the decades. Their goal, in Falzone's own words, was to "be open-minded, spontaneous and creative, even while looking back a few generations." With this in mind Falzone enlisted some of the Windy City's finest musicians to help augment his KLANG quartet, whose line-up consists of Jason Adasiewicz (vibraphone), Jason Roebke (bass) and Tim Daisy (drums). Falzone allows each of his sidemen ample space to express themselves, including special guests Josh Berman (cornet), Keefe Jackson (tenor saxophone and bass clarinet), Jeb Bishop (trombone) and Fred Lonberg-Holm (cello and electronics), following in the footsteps of Goodman's own small combo sessions.

Blending new pieces with startling arrangements of old standards, the record provides a fresh look at the legacy of a respected icon. Throughout the date, Falzone and company bring a kaleidoscopic array of moods to Goodman's work, from the ebullient lilt of "Breakfast Feud" to the evocative film noir shadings of the bluesy "Six Appeal." Falzone includes a handful of covers related to Goodman's oeuvre that encapsulate the legend's stylistic range, from an opulent, almost neo-classical interpretation of the standard "Memories of You" to the unadorned earthiness of "The Wang Wang Blues."

Falzone's originals exude a bracing balance between avant-garde invention and spirited traditionalism, with the abstruse angles, dynamic structural shifts and pithy rejoinders of "The 4:08" and "Goodman's Paradox" serving as cogent examples. Despite his enthusiastic delivery, Falzone never merely imitates Goodman's jubilance; his robust, woody tone and bold phrasing skirt the edges of conventional harmony without drifting beyond the boundaries of tonality. Supported by the lively contributions of his sideman Other Doors easily sidesteps the nostalgic clichés that plague many similar homage's by bringing a freewheeling and modernistic vitality to the enduring work of a celebrated innovator.