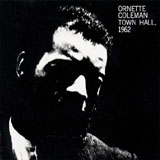 Ornette Coleman's theory of harmolodics set a standard for improvised music that is unrivaled. Coleman closed the synaptic gap between the conception and implementation of the musical idea so that spawning the music became a conjugation of the harmonic relationships that live within it.

The ESP-Disk re-release of Ornette Coleman Town Hall, 1962 brings the music so close to the experience that the performers seem to be just yards away. The sad fact remains that this is only part of the night's worth of music; the whereabouts of the rest is regrettably unknown.

The bright spirit stemming from Coleman's youth permeates the sound of the four-track recording with innovation. Coleman's searing stepped scale ascension on his alto bursts open the music to carve out his sonic territory; he is accompanied by light touches and constant motion on the snare and cymbal and a relaxed rich pizzicato on the bass. Coleman carries the weight of the music through an endlessly changing tuneful line until he rests and lets bassist David Izenzon's arco fly and Charles Moffett's stick work map the way into a snare/cymbal rendering of the tempo. Coleman holds a high pitch on his horn to wrap up the first song, "Doughnut." The memory of that pitch transfers to the jaw-dropping purity of tone that Coleman illustrates on "Sadness."

"Sadness" has to be one of the best models for evoking the meaning of its title, besides Coleman's classic composition "Lonely Woman." At age 32, having mastered his instrument, Coleman plays unwavering, potent single notes and melodic phrases of compelling poignancy. Contrast the gripping soundscape emanating from the alto with tonal arco vagaries on the bass, precise brushwork on the drums and expansive sibilance on the cymbals and the result is unforgettable.

The presence of a piece for string quartet is no less a distraction than a Rembrandt portrait would be hanging next to a Picasso collage abstraction. The instrumentation may seem antithetical to expectations brought to Coleman's music. But, following the path of every string instrument in relation to one another on "Dedication to Poets and Writers" substantiates the integration in which Coleman staunchly believes.

The final 23-minute "The Ark" widens the distance among the instruments in a true test of improvisational limits. Coleman presses through a loosely defined middle range in the form of ostinatos and relentless melodic bounce. Moffett can only respond with bold polyrhythmic moves and Izenzon with deep pizzicato splurges and assiduous bowing. Nineteen minutes in, Coleman slowly squeezes out a seemingly strained high pitch, a signal for the tonal climb that ensues until closing with the bass's fast paced bowing in its upper register.

In the stream of its apparent freedom, this trio acts with constraints, imposed not by restriction, but by genius. To know what later transpired could only underscore the appreciation of what already exists.

Doughnut; Sadness; Dedication To Poets And Writers; The Ark.