By IAN PATTERSON
September 27, 2013
Sign in to view read count 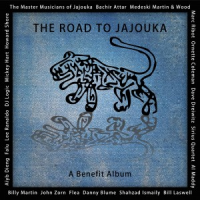 Bringing together Moroccan traditional trance musicians with free spirits such as saxophonists Ornette Coleman and John Zorn, bassist/producer Bill Laswell, guitarist Marc Ribot, DJ Logic and drummer Billy Martin has instant appeal. It sounds like an andrenaline-pumping, trippy exercise on paper and for much of the journey it's just that. And it's all for a good cause too, that's to say, the preservation and promotion of an ancient musical form. Yet the story behind the Master Musicians of Jajouka almost trumps the music here.

The twelve hundred year old Sufi trance music of the MMoJ has long held fascination for Westerners. Hailing from the southern Rif Mountains of Northern Morrocco, the commercial potential of these Berber musicians was realized decades before the term World Music was coined. In her book The Dream at The End of The World: Paul Bowles and the Literary Renegades in Tangiers (HarperCollins, 1991) Michelle Green described how in 1954 influential English artist Brion Gysin co-ran a restaurant in Tangiers called "1001 Nights" where the MMoJ performed as part of a cabaret that included dancing boys, acrobats and fire-eaters for an eclectic Western clientele.

Tangiers then was a playground for the rich and a magnet for artists and literary types and hedonists of all persuasions, drawn by an atmosphere of easy vice. It was all a far cry from the Sultan's palace, where the MMoJ had been the royal musicians, playing sacred music for several centuries up until the early 20th century.

Writers Paul Bowles and William S. Burroughs made their way to the Rif Mountains in the 1950s to experience the intoxicating music for themselves. Rolling Stone Brian Jones followed their footsteps, recording the MMoJ in 1968 and Ornette Coleman did likewise five years later. In the intervening years the MMoJ have been the subject of documentaries and their music recorded by Laswell, producer/tabla player Talvin Singh, film maker Bernardo Bertolucci—in his adaptation of Bowles' novel The Sheltering Sky (1949)—and the London Philharmonic Orchestra.

The MMJ recorded with the Rolling Stones in 1989, undertook European and North American tours in the 1980s and 1990s and recorded on singer Peter Gabriel's prestigious Real World label. In 2009 the MMoJ played the Glastonbury Festival and in the same year London's Meltdown Festival, where they were joined by Coleman and guitarist Bill Frisell.

So, given all the courting and international exposure it may come as something of a surprise to learn that the existence of the MMoJ is threatened. In a familiar rural tale the youth from Jajouka is abandoning the village, lured by the prospect of a better life in Tangiers or Paris. Some of the older musicians have passed and others suffer poor health. For the first time in over a thousand years the prospect of the music failing to reach future generations looms. "Many people ask about the future of the village and our music, which is very good," notes MMoJ leader Bachir Attar. "But after many thousands of years, maybe there is an end?"

Attar's friend and musical collaborator Billy Martin of Medeski Martin &Wood fame has gathered a host of concerned musicians to assist the Jajouka Foundation. Proceeds from this CD will go towards building a music school, providing health care and helping preserve the MMoJ's music. The music here consists of remixes of previous MMoJ recordings with guest musicians providing overdubs. With the exception of Attar on flute and ghaita the MMoJ are largely reduced to background music—at times distant—on a lot of the tracks—with drums, flutes and reeds providing little more than an atmospheric foundation. Their individual contributions, moreover, are not credited.

A dub vibe colors "Ghaita Blues" but there's little in the way of narrative. Attar and a fired up Coleman unite 40 years after the saxophonist's field recordings of the MMoJ, on "Jnuin," the most organic sounding track of the CD. Falu's Indian classical voice dominates "Sufri Hadra" over Laswell's simple bass line and Aïyb Dieng's talking drum. "Al Aita" weds the MMoJ with Howard Shore and the London Philharmonic in an undeniably potent collaboration that provided the soundtrack to the film The Cell (2000).

The best moments of this rather eclectic musical collage hint at the hypnotic qualities of the MMoJ's ritual music that has entranced Sultans, poets, rock stars, jazz musicians and global folk festival audiences alike through the ages. If The Road to Jajouka helps secure the MMoJ's future it can be considered a success, but there's still room for a collaborative project that recognizes the primacy of the MMoJ in the mix.