By Jeff Dayton-Johnson
February 28, 2013
Sign in to view read count 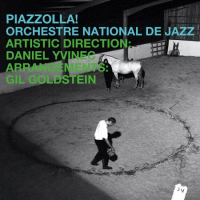 The Argentinian composer, bandoneón player and tango revolutionary Astor Piazzolla (1921-1992) was no stranger to jazz. As a music student in Paris in the mid-1950s, he was inspired by the joyous improvisation he witnessed in the effervescent Left Bank jazz scene. He would go on to collaborate with baritone saxophonist Gerry Mulligan (Summit/Reunion Cumbre, Erre, 1974) and vibraphonist Gary Burton (The New Tango, Atlantic, 1986). Indeed, Piazzolla integrated jazz sensibilities into his music over a span of decades. On the evidence of this recording by France's National Jazz Orchestra, it seems that jazz would do well to return the favor. Piazzolla! exhibits visionary conception, exquisite craftsmanship and dazzling variety.

The ONJ under Daniel Yvinec (who took the reins in 2008) has already distinguished itself with ambitious projects: a tribute to an enigmatic English rocker (Around Robert Wyatt, Bee Jazz, 2009) and collaboration with composer/percussionist John Hollenbeck (Shut Up And Dance!, Bee Jazz, 2010).

Yvinec laid down two principles: first, he didn't want to do a "tango" album; and second, he didn't want to include the bandoneón, Piazzolla's instrument. He held fast to both rules, but with some caveats. Yvinec and Goldstein let Piazzolla's melodies rather than the tango rhythms occupy center stage, but the dynamic violence of the tango makes itself felt (for example, on "Tres minutos con la realidad").

As for the bandoneón, the Argentinian novelist Ernesto Sabato said of it, "Only this instrument could sing to death and solitude. It is an instrument of metaphysical resonance." Yvinec must have reached a similar conclusion. Realizing that the instrument is consubstantial to Piazzolla's music, and he and Goldstein strove to convert the orchestra into a kind of giant bandoneón. In this, they are well served by the remarkable precision and empathy of the group's playing. The orchestration and ensemble playing on "Mi refugio" is an especially excellent example the many-headed bandoneón sound they achieved.

More generally, the mixture of charts and playing is breathtaking. On several cuts—"Libertango," "Sunny's Tune"—the orchestra swirls dizzily to a climax and then stops on a dime. Individual voices in this young orchestra stand out as well: Vincent Laffont's always apposite electric keyboards, Antonin Tri-Hoang's Eric Dolphy-esque reeds on "Adiós Nonino."

Goldstein's arrangements, meanwhile, highlight not only the variety of Piazzolla's better-known compositions, but also the variety—dynamic, thematic, emotional—of this orchestra's resources.