Bassist, multi-instrumentalist, composer and producer, Daniel Yvinec – who transforms himself into Yvinek when he devotes his energies to electronica – is remarkable for his atypical and cosmopolitan career path. Insatiably curious about all forms of music past and present, while at the same time firmly rooted in jazz tradition, it’s a path that’s naturally crossed those of the many different artists he has worked with live and in the studio, including Maceo Parker, Tania Maria, Salif Keita, Mark Turner, John Cale, Suzanne Vega, David Sylvian, Hector Zazou, Ryuichi Sakamoto, Andy Bey, Michael Leonhart, Donald Fagen, Dead Can Dance, Magic Malik, David Fiuczynski, Wayne Krantz… Standing back from the limelight, he’s also, with boldness and finesse, produced albums for Brisa Roché, Nelson Veras, Stéphane Guillaume, Greg Zlap and Lilicub.

Yvinec conceives his own projects with independence of mind, either alone or in the company of talented acolytes. His first album, the electro-jazz manifesto Recycling the Future, was released in 2002 and brought him international acclaim. He also works frequently with pianist Guillaume de Chassy, with whom he’s just recorded a fourth collaborative venture, calling upon the services of Paul Motian and Mark Murphy. This follows on from its three predecessors, Ghost of a Song and Chansons sous les bombes with André Minvielle, and the dreamlike Wonderful World, which reveals the universality of the great American standards. Yvinec has continued to explore these themes in other projects, notably Old Wine New Bottle – a singular instrumental formula he also presented live in 2007, in which acoustic and electronic instruments share the stage with Baschet crystals and toy instruments – and the élégant album The Lost Crooners, on which he is joined by Nelson Veras, Stéphane Galland, Médéric Collignon and Benoît Delbecq.

In addition to his activities as a musician, this indefatigable music lover, whose home contains some 30,000 records, is a member of the Académie Charles Cros, and keeps his musical passion, judgement and culture ever awake through different media : radio, press, workshops and teaching. He’s also the author of The Umbrella Man (Livre de Poche) and is currently at work on Le Jazz expliqué aux enfants (“Explaining Jazz to Children”), scheduled for publication in 2009. He takes up his new position as Artistic Director of the Orchestre National de Jazz determined to take this 10th edition of the ONJ along with him on a truly passionate adventure.

Shut Up and Dance 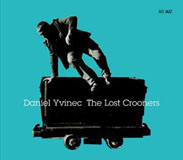 All About Jazz musician pages are maintained by musicians, publicists and trusted members like you. Interested? Tell us why you would like to improve the Michael Manring musician page.