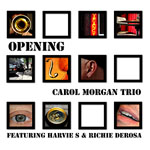 Opening is an album so rich in the intricacies of melody that it never fails to surprise at every turn. The saddest aspect of the album is that it is all too short. But the biggest surprise of all is Carol Morgan, a trumpeter who seems to have awakened the urge to find parallels in phrasing with the great Clarence Shaw. The often discussed "talking" style of playing attributed to men like Shaw, as well as trumpet players such as Louis Armstrong, Jabbo Smith, Bubber Miley and Rex Stewart, finds its new epitome in Carol Morgan. Her "trumpet voice" is raw and husky, and it often slips into a velvety intonation that is so seductive it's impossible to resist. It stuns the inner ear into a kind of rapture that comes from being completely captivated by her sound. The notes she plays—no matter how brisk the pace of the song is—are flawless. And because she has an uncanny sense of finding the right note to begin with, her phrases are brilliantly crafted and become lines that are as narrative in a riveting way as they are lyrical.

For this extraordinary project she has chosen her partners well. Bassist Harvie S and drummer Richie DeRosa are both astute listeners and responsive accompanists. The multi-faceted Harvie S brings all his beguiling skills to this album. His playing is wonderfully rhythmic, and he has a sublime sense of digging out melodies embedded in the rhythmic progress of the songs. His solos are filled with lyricism and he is a master of understatement, yet he constructs lines like an accomplished architect attuned to the exclusive musicality of each piece. DeRosa has the heart of a bebop drummer and recalls the dancing sense of Roy Haynes as he rattles and rolls his sticks on taut skins that seem to break into songs all their own every time he strikes them.

This short album is also a showcase for Morgan's innate comfort with several kinds of repertoire at once. Her own bebop-style composition "Opening Line" is a taut number with a slanted song line. Here Morgan sets a fresh tone and vocabulary. Bud Powell's "Celia" and Kenny Dorham's "Prince Albert" are both moving sketches in classic bop as well as beautiful vehicular designs for Morgan's vocal style. On the former track the trumpeter shows immense skill in navigating an extraordinary range on her horn with clarity, puckish humor and the ability of a skilled painter as she colors the melody with sublime instinct and grace.

"Dark Continent" ends up showcasing DeRosa's polyrhythmic ability while the voicings of trumpet and soprano saxophone are delightful and lend an airy character to the song of mystery. "Like Someone in Love" is anything but an obligatory standard as DeRosa's brushwork and Harvie S's masterful solo swing with abandon and Morgan's own inside-out reading of the song make it both familiar and delightfully new.

With this album, Carol Morgan has clearly arrived and is set to take the trumpet world by storm.