By Mark Sullivan
August 8, 2018
Sign in to view read count

I didn’t know what improvising meant...I just knew I liked the sound of it.
—John Abercrombie 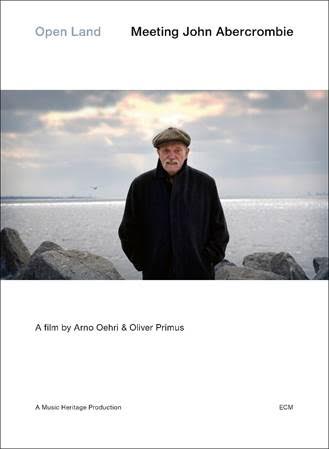 Named after John Abercrombie's 1999 ECM album of the same name (by his trio with organist Dan Wall and drummer Adam Nussbaum, plus guests trumpeter Kenny Wheeler, violinist Mark Feldman and saxophonist Joe Lovano), Open Land finds the guitarist late in his career. Much of the ninety minute run time shows him talking about his life as a jazz guitarist and bandleader—going all the way back to his first exposure to the guitar and his time at the Berklee College of Music—as well as visiting his childhood home and the site of the December 2003 house fire that destroyed most of his possessions. There is no date given, but based on his trio at the time (an organ trio with Nussbaum and Gary Versace replacing organist Dan Wall) the interviews probably took place around 2014.

The interview segments have an intimacy that feels like hanging out with Abercrombie. He is warm, funny, and self-deprecating; one senses that he may have had mixed feelings about being the subject of a documentary in the first place, but he is completely open. At one point he says on camera: "This is how I look. Maybe we can get somebody to play me" (and jokingly suggests Brad Pitt). He talks guitars with NYC luthier Ric McCurdy, teaches music students at Purchase College, and hangs out at home with wife Lisa and Al the cat (we also hear about their courtship and the early years of the marriage).

Abercrombie describes the process of learning about jazz, first hearing guitarist Barney Kessel (his first exposure to jazz guitar playing), then pianist Dave Brubeck, and finally trumpeter Miles Davis (which completely blew his young mind). "I didn't know what improvising meant...I just knew I liked the sound of it." Living so close to NYC, he was able to visit jazz clubs, even while too young to drink alcohol—they had special sections for underage audience members. Thus he was able to hear seminal artists like saxophonist John Coltrane and pianist Bill Evans live. That experience deepened when he had a professional gig in Boston which allowed him to hear players at the famous Jazz Workshop jazz club. We also get to see Abercrombie describing his compositional approach at the piano. And he describes his absolute terror recording his first record (which remained his father's favorite, because it was an organ group that sounded like "real jazz"). He describes the emotional feeling he has in common with other ECM recording artists as "a little melancholy, a little mysterious, less in your face." He also talks about his switch from playing the guitar with his fingers rather than a pick.

Live music segments are devoted to gigging with organist Gary Versace and drummer Adam Nussbaum in Lichtenstein, and jamming with saxophonist Rob Scheps, drummer Eliot Zigmund and bassist David Kingsnorth at his home in New York. Versace and Nussbaum both talk about working with Abercrombie. Versace especially speaks about the guitarist's openness in working with his band mates, which may give one clue to the meaning of the film's title. Director Arno Oehri and producer Oliver Primus found a good balance between visuals and music, employing several Abercrombie ECM recordings for connecting music along with some beautiful location views (e.g. the nighttime New York skyline similar to the photograph used for the album cover of 2009's Wait Till You See Her, several NYC jazz clubs, air flight overseas to perform) and historical photographs. It is no accident that there is a lot of driving footage, a common fact of the touring musician's life. Appropriately enough, the film ends with the composition "Timeless"—Abercrombie's first ECM recording, his first as a leader, and perhaps his most successful album—along with his description of how the project came to be.

Open Land: Meeting John Abercrombie fulfills the promise of its title. One might wish for a little more live footage, but surely any Abercrombie fan will enjoy this intimate look at Abercrombie the man and the musician.