Papanosh in a Finnish Forest 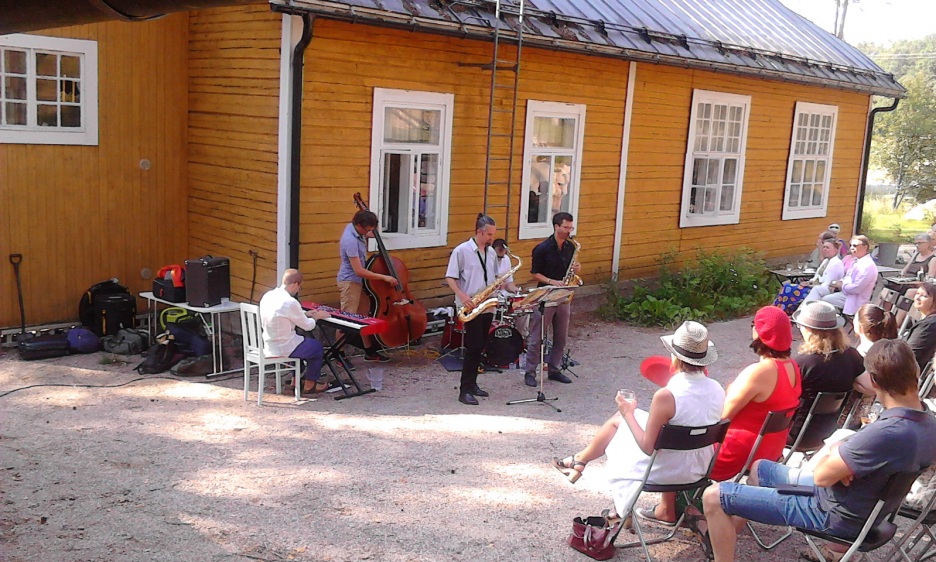 BY ANTHONY SHAW
August 8, 2018
Sign in to view read count

This very rural scenario had the intensity of a transnational musical voodoo in the very green depths of the Sunday evening Finnish forestscape.

If one believes that music originated in primitive wo/man's appreciation of the natural rhythms occurring in nature, then what better environment to witness live music than a shady dell, sheltered from the sun as well as the adjacent road by a solid wooden Finnish log house. The wind was barely rustling the leaves, and the fiery heat of an exceptional Nordic summer was past its worst when Papanosh took to the dirt, the yard at the back of The Yellow House, a kind of village hall cum arts venue on the edge of the sleepy village of Janakkala, 60 minutes north of Helsinki.

This French Normandy quintet fitted seamlessly into the dreamy world of late summer evening relaxation, albeit being the last day of the summer holidays for many Finns. The quintet are a supremely tight unit, despite the absence on this short Finnish tour of trumpeter Quentin Ghomari, replaced by tenor saxophonist and member of their Rouen-based collective Julien Kolko. But the band could still effortlessly vary their tone between searing Eric Dolphy atonality, thoughtful and intricate reveries like Sebastien Palis' "Pour Andre," and more humorous and accessible dance tunes of composers like Brazilian Hermeto Pascal and fellow Frenchman Joseph Colombo.

The first set was a selection of tunes from the recent Chicken in a Bottle, released in 2017 on Yellowbird Records, as well as hints from the latest album Home Tunes, recorded this year with Roy Nathanson. In the second set there was more than a hint of Spanish and specifically Mexican music in contrast to the dissonant chords and irregular rythms of their own work, no more so than when saxophonist Raphael Quenehen breaks into melodious song with El Querreque.

What characterizes this music for me is the sense of playfulness that pervades much French jazz.  Papanosh's tunes can sound like those of a circus troup warming their audience under a big top before the balahoo of live entertainers. The drummer's rims rattle with anticipation, the bass drum pounds during a lengthy solo and the cymbals tinkle and hiss through the trees in this ever so delightful ambience. But then a piece like their anarchic opener "Skatefulk" sets the audience back in their seats and one wonders whether the humorous atmosphere was just a deception to get our blood running faster. It may not have been a rumble in the jungle, but this very rural scenario had the intensity of a transnational musical voodoo in the very green depths of the Sunday evening Finnish forestscape.