David Sanborn: Only Everything

By JOEL ROBERTS
February 5, 2010
Sign in to view read count 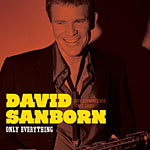 Only Everything is alto saxophonist David Sanborn's second straight release paying homage to one of his greatest and earliest influences, Ray Charles. While some jazz purists may dismiss Sanborn as a slick TV personality and practitioner of smooth or pop jazz, he's always had firm roots in bluesy, R&B-based jazz, dating to his early days playing with the likes of Albert King and the Paul Butterfield Blues Band. And along with his more commercially calculated recordings, he's released some excellent straight-ahead, even experimental albums over the years, notably 1991's out-of-left-field Another Hand (Elektra), which featured Sanborn in the company of Charlie Haden, Marc Ribot and Bill Frisell, among others.

Like its predecessor, 2008's well-received Here and Gone (Verve), Only Everything highlights the contributions of Charles' star saxophonists Hank Crawford and David "Fathead" Newman, both of whom passed away last year within days of each other. Sanborn pays tribute to his fellow saxmen here with a rousing take on Crawford's "The Peeper" and a moving treatment of Newman's signature tune, "Hard Times." Throughout, Sanborn's earthy, slightly tart alto and DeFrancesco's booming, soulful organ make a compelling pairing, with the often subdued Sanborn playing with unexpected fire and the flashy DeFrancesco showing some welcome restraint.

The album's two vocal guests have mixed results. Young pop-soul star Joss Stone has great chops, but tries too hard on "Let the Good Times Roll" while the always relaxed James Taylor fares better on a cool, low-key reading of "Hallelujah, I Love Her So."

The Peeper; Only Everything (For Genevieve); Hard Times;Let The Good Times Roll; Baby Won't You Please Come Home; You've Changed; Hallelujah I Love Her So; Blues In The Night.