By EDWARD BLANCO
February 1, 2021
Sign in to view read count 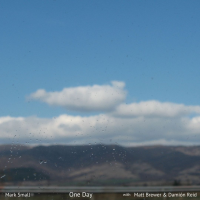 Saxophonist Mark Small is an active performer and educator teaching at Miami-Dade College and New World School for the Arts. He also serves as an instructor in other programs throughout the Miami community, in addition to his time spent in the New York jazz scene. He brings his considerable knowledge and talents to the fore on his first solo recording of One Day, where he presents eight original compositions penned over many years, fulfilling one of his major musical dreams by finally making ..."a statement of my own."

Small is no novice, having amassed an impressive musical background that includes performing with the Village Vanguard Orchestra and as a sideman with the likes of John McNeil, Martin Bejerano, Ignacio Berroa, Nicole Henry and many others. However, it may have been his touring experience with the Michael Buble band that cemented his name as a musician of note through his arrangements and compositions, as well as his skills on the saxophones and clarinet.

Having performed with so many musicians over the years, Small decided to record in a trio format, calling upon two friends he had not played with in some time. Reuniting with leading bassist and fellow educator Matt Brewer and drummer Damion Reid, better known as "controlled fury" by critics, this saxophone trio seems the perfect vehicle to interpret the range of styles Small explores on this project.

Opening up on the blues-styled "Sonny," perhaps a tribute to Sonny Rollins, the band plays it free-style, with each member taking separate solo moments as the Bill Frisell-tinged "Tumbleweed" occupies a more mellow spot on the session. More of the free-style comes across on the ECM- inspired "Charmer," with Small's tenor voice being the most pronounced.

While each composition here reveals elements particular to that tune, the stories they tell are as different as night and day, as evidenced by the sharp "GeeZee," and the lighter and slower-tempo of "Local Color," both driving in different, musically-challenging directions.

What makes performing with a trio more preferable than being a part of a larger ensemble is that with only three players, each instrument plays an equally important part in the music which comes through loud and clear on this recording. Captured here are the sounds of a howling saxophone, a powerful bass and a pounding drum set showcasing a cohesive band of brothers.

Mark Small's One Day succeeds on many fronts, from fulfilling a dream to making a fine musical statement. However, what may be perhaps more significant is a well-deserved recognition of a talented composer and skillful reed player the jazz world will surely hear from often.