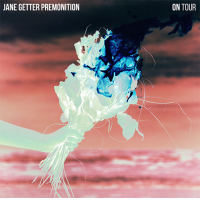 With the release of ON (Madfish/Snapper, 2015)—the debut album with her newly minted Premonition band—guitarist Jane Getter completed her move from the funk/fusion guitar workouts of her first two albums (1997's Jane and 2005's See Jane Run) towards a more progressive leaning which began with Three (Alternity, 2012). It's a move that the New York-based Getter has managed with considerable success—no doubt, to some extent, the result of her husband and only constant across all of her solo recordings, keyboardist Adam Holzman, and his now six-year relationship with British progressive rocker Steven Wilson. But you may be able to take the guitarist out of jazz but you can't take the jazz out of the guitarist—especially in the three-minute solo guitar "Diversion Intro," found on ON Tour, which documents the two different lineups Getter employed during 2015 and 2016 dates in the USA and Europe in support of ON.

If not having a consistent band might be perceived, by some, as a detriment, both still possess plenty of consistency through the participation, along with Holzman, of second guitarist Alex Skolnick. Skolnick may be best-known for his tenure in American thrash metal band Testament—and deemed, in a 2014 Guitar World magazine readers' poll, as not just one of the greatest guitarists of all time, but one of the fastest in the world—but he also began publicly dipping his toes into jazz waters with the surprising Transformation (Magnatude, 2004). His clear acumen in both arenas makes him a perfect second guitarist on ON Tour; Getter retains most of the solo space, but he's still afforded plenty of energized moments as well.

Still, the majority of ON Tour is a showcase for Getter and co-producer Holzman, though there is plenty of room afforded to drummer Chad Wackerman, a charter member of Premonition who plays on all but three of ON Tour's ten tracks—and who is featured almost exclusively on the aptly titled, two-minute mesh of Holzman's electronics and Wackernan's powerful kit work, "Opener." Wackerman is also given some solo space on the harmonically sophisticated but ultimately ear-crunching "Diversion" and closing "Somewhere Jam"—a studio blow recorded during the ON sessions in October, 2014—which takes ON's funkified "Where Somewhere" as its foundation, with Wackerman taking ample space for a virtuosic, ostinato-driven solo near the end of its ten-minute run.

"Somewhere Jam" also provides an opportunity for reed/woodwind multi-instrumentalist Theo Travis to layer some ethereal flute during its more atmospheric beginning, before turning to soprano saxophone as the jam picks up steam with its emerging riff, and a brief but incendiary tenor spot as it comes to its fiery close. Travis' appearance is restricted to this track on ON Tour, but Holzman's one-time Steven Wilson alum was also recruited for two guest spots that ultimately made it onto ON.

It's also the only track to include charter Premonition bassist Bryan Beller—and, by creating both a perfectly designed textural/harmonic backdrop for his band mates and a move to the fore for a soaring, guitar-inflected synth solo, demonstrates why Holzman has been Steven Wilson's only constant companion since first putting together a touring band in support of 2011's Grace for Drowning (Kscope). Getter also takes a set-defining solo that builds gradually, all heavy overdrive, angular phrasing and whammy bar action, leaving Skolnick to take a second, near-light-speed solo near the jam's end. It may be a bonus, but as an album closer, it's one of ON Tour's most eminently exciting tracks on an album filled with electrified energy, propulsive riffs and ear-blasting power.

The balance of ON Tour—barring "Opener," "Diversion Intro" and Three's metallic, riff-driven but nevertheless episodic "Inversion Layer" (an ideal addition to the set list)—is culled from ON. On "Diversion Intro," Getter turns away from much of ON Tour's grit and grease, going for a warmer, delay-driven tone as the former Saturday Night Live guitarist makes clear, with a demonstrative combination of sophisticated chordal and linear phrasings, that she may be more progressive-leaning these days but has lost none of her jazz chops. "Inversion Layer," featuring bassist Stu Hamm and drummer John Mader—who appear here and on two other tracks—is closer in texture to the rest of ON Tour, a combination of mellotron-drenched, thundering power riffs and delicate dual-guitar chordal work.

Like ON, ON Tour includes a number of vocal tracks. Back from ON, Living Colour's ever-audacious Corey Glover brings even greater expression and stratospheric energy to both the dark-hued yet still rock-edged "Surprised" and a slightly extended "Train Man"—the latter, sporting a set of lyrics that only a New Yorker like Getter (who composed all the music here, with the exception of Holzman's electronic context for Wackerman, "Open") could pen.

Elsewhere, on ON Tour's remaining six tracks, the vocal duties are handled by Chanda Rule—typically a jazz singer but who, on the gentler, acoustic/electric guitar duality of "Falling," shares vocals originally sung by Getter alone on the studio version, demonstrating greater stylistic breadth despite it being a tune that leans the most, perhaps, towards the fusion side of On Tour's progressive equation. Both Holzman's extended piano solo and a similarly impressive guest appearance from percussionist Mino Cinelu render this the definitive version.

Rule also shares vocal duties with Getter on "Transparent," initially another acoustic guitar feature, before turning up the electricity for a riff-driven section that features a scorching solo from Getter before both the guitarist and Rule get a chance to expand their vocals when the tune nears its conclusion: the two singing just the word "Transparent," in perfect harmony.

Barring the Beller/Wackerman rhythm section of "Somewhere Jam" and three tracks with Hamm/Mader, the rest of ON Tour pairs Wackerman with bassist Mark Egan, who takes a characteristically lyrical solo over the acoustic half of "Transparent," but whose muscular tone and empathic connection with the drummer make the pair truly a force with which to be reckoned.

But while everyone who performs on ON Tour is impressive—delicate when required, massive when necessary—it's the core trio of Getter, Holzman and Skolnick that provides both ON Tour's underlying consistency and the majority of its most thrilling moments. Holzman's astute keyboard choices—from mellotrons and synths to pianos both acoustic and electric—are part of why both ON and, now, ON Tour sound so rich, so big...so wonderful. His virtuosity—like that of his various band mates across this primarily live album—is a given; but it's his ability to intuit both the right colors and the perfect approach in his playing that make him so essential to this group (and, for that matter, Steven Wilson's).

While most of ON Tour's tracks generally run in the same ballpark as their studio counterparts, "Diversion," at a full three minutes longer—six, if the "Diversion Intro" is included—allows its soloists the opportunity to stretch out a little more. Still, another virtue of ON Tour is its well-honed blend of strong compositional forms and just the right amount of solo space, never approaching excess.

In a world filled with guitarists—and with DIY recording allowing more of them to get released than ever before—there's a lot of competition to rise to the top. As strong as her first couple of albums were, it's been in her move towards a progressive-leaning variant of fusion, which began with Three and became more cemented with ON, where Getter has more fully established herself as a unique and identifiable voice. Her songwriting covers plenty of stylistic ground, even within the progressive fusion framework; she has a strong partner in keyboardist/co-producer Holzman; and her playing—more open here, in a live context—invariably leans away from superfluous pyrotechnics, even as it brings together a healthy dose of chops, terrific tone and, in her solos, the kind of compositional focus that makes them as memorable as they are impressive.

Released independently, the in turns exhilarating, lyrical, delicate and crunching 66 minutes of ON Tour is a terrific document for those who managed to catch some of her shows...and, perhaps, an even more essential one for those who didn't. It will also, hopefully, maintain the momentum she began to build with ON; Getter's next studio album can't come soon enough.