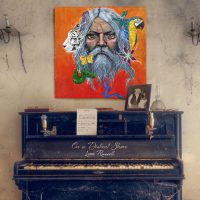 In the same way that the death of my Aunt Irene in the early 1990s showed me Father Time was coming for my immediate family, did I realize the same fate awaited my musical heroes when Frank Zappa was shown the door about the same time. This past year has been especially hard with the deaths of Chuck Berry, Gregg Allman, and, now, Leon Russell. Russell was one of those artists who got old all at once. It is easier to think of him strutting on the stage of Mad Dogs and Englishmen than the wizened "master of space and time" performing with Elton John on The Union (Decca Music Group, 2010). Hell, he always had grey hair, so that was no tell. It was only when he became the most like himself on his final recording, On a Distant Shore did the ubiquitous session pianist finally sit still and rest. Like Allman, I suspect that Russell realized that time was short. I want badly to criticize Russell's final effort in the same way I did Allman's Southern Blood (Rounder, 2017) for being a synthetic depiction of a once supremely organic talent. But, that is not being fair.

Plush and dense are the strings and horns accompanying Russell, recalling Phil Spector's "wall of sound" in which Russell performed in his salad days. Russell's voice remains as vital as ever, betraying it age, but it was always an old voice, one like Neil Young's or his partner Joe Cocker's. Not necessarily pretty, but unique and distinctive. Russell's voice retained every bit of Oklahoma dust bowl he inhaled while growing up in Lawton in the '40s and '50s. Russell peppers his mostly contemporary compositions strategically with "This Masquerade," "Hummingbird," and "A Song for You." No "Stranger in a Strange Land," no "Roll Away the Stone." He was past all of that.

The music on this disc is very good, as one would expect from such a fine musician. But what I am posting as Youtube examples are how I will want to remember this singular musician.

On a Distant Shore; The Night We Fell in Love; Love This Way; Here Without You; Inside the Night; This Masquerade; Black and Blue; Sweet Valentine; Just Leaves and Grass; The Love of My Life; On the Waterfront; Easy to Love; Hummingbird; The One I love is Wrong; Where Do We Go From Here; A Song for You.