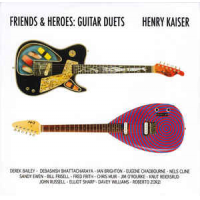 There a real Smörgåsbord of pieces on Henry Kaiser's Friends & Heroes: Guitar Duets. They are stylistically varied improvisational vignettes ranging from the eccentric "Three Languages" with Fred Frith to the heavy electric blues of "A Mighty Fire" with Knut Reiersrud. There's also prog(-ish) rock on "Harmony Jam" with Nels Cline and there's a kind of electronic serialism on "All Aboard For Futureseville" with Jim O'Rourke. For sheer sublimity though, "The Distant Thunder" would be hard to beat, Debashish Bhattacharaya on classical Hindustani slide guitar, which, to some extent, emulates the sound of the sitar.

But it's the opening track "Chrysanthemums" with the late Derek Bailey that's probably the key to the whole thing, Kaiser revealing that the great guitar improvising innovator was, in his words, "the primary reason that I started to play guitar in the first place" and this very short duet with Bailey is surprisingly congruent. Other of Kaiser's heroes include Bill Frisell and they are both heard duetting on "The Very Last Of The Very Few" which is presented as an electronic soundscape. British improv guitarist Ian Brighton, another early disciple of Bailey's is heard to great effect on "Infinitum Ad-Infinitum" as is fellow British improviser John Russell, again one of Bailey's renowned acolyte's, who features on the final track "Split The Difference" which works well. On "Skipper Sedley," a duet with Eugene Chadbourne the distinction between the two guitarists is unclear but the listener could hazard a guess that Chadbourne is playing the improvised tune whilst Kaiser offers chordal accompaniment, but the reverse could be true!

Kaiser himself is something of a polymath for apart from being an experimental guitarist of note, he is a deep sea diver for the U.S. Antarctic programme and an accomplished film maker. One of his solid electric guitars, shown on the front cover of the CD depicts a Telecaster of sorts, heavily decorated with marine images reflecting his aquatic pursuits. This compilation CD, which, necessarily, weighs-in at the full 79 minutes, is studded with a panoply of tonal and harmonic nuggets whilst employing a prodigious variety of styles and performances. So there's truly something for everyone here.