Jason Whatley: On the Beak

By Dan McClenaghan
January 8, 2021
Sign in to view read count 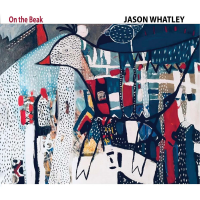 If Australia is "The Land Down Under," then Tasmania could be called "The Land Way Down Under,' a thumbprint of a main island cut adrift from the southern hemisphere's one country continent about 12,000 years ago, at the end of the last ice age, to sit off the south western corner of the state of Victoria, not too far from Antarctica.

An isolated land with a population of about 550,000 that doesn't get a lot of airtime on northern hemisphere information chains—so the question is (this from an ethnocentric American viewpoint): does Tasmania have jazz?

Pianist Jason Whatley has participated in pop-rock outfits, and he has released a solo guitar/vocal album. But with Newfound Cool (Self Produced, 2013), and nowOn the Beak, he has settled into a jazz guy groove.

As a pianist, Whatley brings Duke Ellington to mind, with his crisp, slightly astringent touch. He opens the set with "The 60s," that sounds like one of the small group sessions that saxophonist Johnny Hodges recorded with Ellington—an optimistic vibe, Whatley sounding very Ellingtonian, saxophonist Damon Warner displaying a robust, Coleman Hawkins feel. "The Ghost At The Feast" flows in a smooth and gorgeous ballad mode, featuring a succinct and well-constructed piano solo early on. "Bitch In Blue" is a deep, dark blue tune, sounding like a late night, relax-after-the-show workout, played more for the musicians involved than for the audience, and all the more appealing for it.

With Whatley's earlier piano solo being described as "well-constructed," the same can be said of the entire set—eight sharply-crafted tunes, all from Whatley's pen, all in the three to four minute range, no wasted notes or riffs. Get-down-to business, top notch, straight ahead jazz, played with precision and a joyous flair, and maybe a touch of good time insouciance.

"Supper Club" seems to summon the ghost of alto saxophonist Paul Desmond, and "Hard Bitten" would fit well into an Art Blakey set list. And for those who have hankering to hunker down into a noir-ish landscape, "Homicide," the disc's closer, sounds like a long lost outtake from Miles Davis' Ascenseur pour l'echafaud (Fontana, 1958), recorded (or so it sounds) in a dark alleyway behind the French recording studio, shifty characters lurking in the shadows.

The 60s; The Ghost at the Feast; Bitch in Blue; Supper Club; Theme From Still; Hard Bitten; Bird Behooved; Homicide.

Title: On the Beak | Year Released: 2020 | Record Label: Self Produced