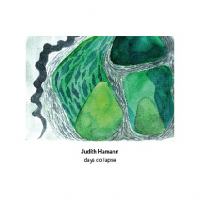 Judith Hamann's Days Collapse is the second of Another Timbre's four "quarantine commissions," following hard on the heels of Repetition of the Same Dream (Another Timbre, 2020) by Clara de Asís & Mara Winter. Hamann is an Australian-born, Berlin-based cellist and composer who holds a Doctor of Musical Arts from University California San Diego, where she majored in contemporary cello performance. At the time, a recently-arrived artist in residence with the Helsinki International Artist Program, during lockdown, from March to May 2020, she was on the island of Suomenlinna off the coast of Finland, where she composed "days collapse," the suite of the four pieces on this album.

In common with de Asis and Winter's experience, the space in which Hamann was working during lockdown became important. She has commented: "This album feels as if it were made in collaboration with the island, with my studio itself being a kind of porous capsule/capture space. The permeability of the space itself brought the island into the record, whether I wanted it to be there or not..." Another important influence on the album is that Hamann was grieving the death of a close friend, Sean Baxter, back home in Australia. Partly because of Baxter's death, Hamann was struggling to feel like playing the cello for the first time ever in her life. Instead, she spent an afternoon modulating feedback with a washing basket and humming, and that became part of the last piece on the album, "Collapse Night," which appeared in a different version, entitled "Days Collapse Days Collapse Night," as part of the AMPLIFY 2020: Quarantine Festival curated by Erstwhile proprietor Jon Abbey. The combination of Hamann's wordless vocalising and electronic tones gives the piece an ethereal quality which is both haunting and chilling, totally fitting as a memento of the dark days at the beginning of lockdown.

Although Hamann's cello is more in evidence on the album's other three tracks, in combination with her voice and various recorded sounds, together they generate comparable moods and atmospheres which again encapsulate the time and location of their recording. Hamann often favours the lower frequencies of her instrument and plays long, lingering notes which practically ooze introspection and melancholy, but are nonetheless moving and stunningly beautiful. While the pieces were not scored, they have obviously been constructed with care, purpose and attention to detail. The end results make gripping listening from start to finish without one false move or wasted gesture. One of these years, someone, somewhere will doubtless make the quintessential motion picture about lockdown 2020; when they do, the obvious next step will be to get Hamann to create its soundtrack. On this evidence, she was made for the job.