Home » Jazz Articles » On Highway 61: Music, Race, and the Evolution of Cultural Freedom ... 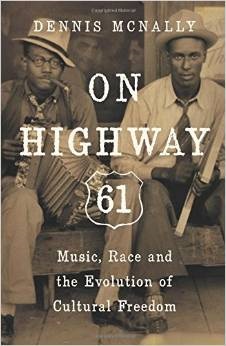 Since Samuel Charters The Country Blues (Reinhart) in 1959, beginning, effectively, the serious reportage of American Folk Music, in particular the blues, there have been two far-reaching trilogies that address American Folk Music against the larger backdrop of race and culture. The first is Peter Guralnick's Feel Like Going Home: Portraits in Blues, Country, and Rock 'n' Roll (Harper& Row, 1971); Lost Highway: Journeys & Arrivals of American Musicians (Harper & Row, 1979), and Sweet Soul Music: Rhythm and Blues and the Southern Dream of Freedom (Harper & Row, 1986).

The second prominent trilogy is by Greil Marcus and includes: Mystery Train: Images of America in Rock 'n' Roll Music (Plume, 1975), Lipstick Traces: A Secret History of the 20th Century (Harvard University Press, 1989), and The Old, Weird America: The World of Bob Dylan's Basement Tapes (Picador, 2011). While Guralnick's set retains remnants of the period's romantic exuberance, Marcus' is often unfocused and impenetrable. Both sets are necessary reading to properly understand the length of America musical history through rock and roll becoming the popular music in the 1950s and '60s.

A third, and to date, most inclusive trilogy has just been completed in On Highway 61: Music, Race, and the Evolution of Cultural Freedom by Dennis McNally. On Highway 61 joins his books, Desolate Angel: Jack, the Beats and America (Book Sales, 1981) and A Long Strange Trip: The Inside History of the Grateful Dead (Broadway, 2002). McNally has spent a life time chronicling the Grateful Dead, for whom he was the authorized biographer of Kerouac the band. He holds a Ph.D. in history from the University of Massachusetts, a fact amply apparent in his superb research but thankfully lacking in his almost conversational writing (read that as: "a user friendly historian").

The main focus of McNally's studies is the American counter-culture as defined by the ideals of the Transcendentalists Henry David Thoreau and Ralph Waldo Emerson. McNally places these characters at the center of the Abolitionist movement of the 19th Century expounding what had to be the most counter-cultural thinking of the period. It makes me wonder, how shortchanged I was studying Thoreau and Emerson in high school (Catholic school at that) and how their then-radical writings were minimized to more style than content. Heaven forbid that a Catholic school should promote Unitarian thinking.

Beginning with Jack Kerouac and the Beats, McNally addresses the most counter-cultural aspects of the post-ear 1950s. In On Highway 61: Music, Race, and the Evolution of Cultural Freedom, McNally draws a thread through music and American Culture starting before the Civil War through the emergence of Bob Bylan. The thread metaphor may be extended to that ribbon of water that nearly bisects the country: the Mississippi River and its Highway 61. With great facility, McNally details in an attractive and easily readable style all of the music spring forth from this rich cultural area, beginning in the Caribbean to New Orleans, Greenville, Tutwiler, Memphis, St Louis, Hannibal, to Chicago and ultimately to Dylan's, Hibbing, Minnesota.

Weaving little known facts about a host of musical luminaries shaping all American music that came after, the author seasons the discussion with the richness of race in America and in particular, the American South. He emphasizes that what America is today is because of African American culture interacting with and changing White Anglo Saxon Protestant America and how this interaction and change has made us all better, at least in the ideal. McNally may have almost been too ambitious in his reach over the subject matter, but his premise never thins and always remains centered in the egalitarian positions posited by the opening characters David Thoreau and Ralph Waldo Emerson, Mark Twain, Walt Whitman and all that came after them. Woody Guthrie's guitar said "This Machine Kills Fascists." So does this far-reaching book.