BY GLENN ASTARITA
March 8, 2015
Sign in to view read count 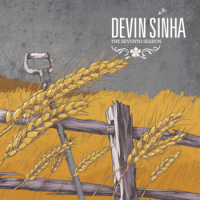 Sinha's straight-forward delivery integrated with yearning melodic overtones project an aura that he's lived the life portrayed via the lyrics and adds a believability quotient to the grand scope of matters. He's an up-tempo crooner and instills gritty electric guitar phrasings into the acoustic-electro production. On "Winter Child" dreamy background vocals, impassioned acoustic strumming, and a whispery motif atop a temperate rock groove underscore the leader's resonant and heartfelt singing. Nonetheless, it's a highly musical album and not stark, dry or overly cerebral.

"Wanderers" offers a contemporary view of bluegrass amid Miranda Rae's streaming violin passages, while "Out Of Love," is framed on Sinha's twangy guitar chords above a slow rock groove about falling out of love and moving on. And the final track "Home," is another leisurely placed rock piece, shaped with drifting qualities followed by a zesty closeout, featuring Rae and Sophie Mei's complementing background vocal choruses. Moreover, Sinha fuses a probing tale interfacing nature and other aspects, but having second thoughts about leaving his home on the prairie for what appears to be life on the West Coast. Therefore, his rather inviting sense of realism and relatable depiction of life's twists and turns are vividly contrasted by a synthesis of hope and good will. And it's supplemented by an overall musical platform that tends to grow on you after a few preliminary listens.