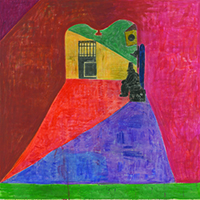 Eastern Europe on the razor's edge. The Eastern European music called Klezmer is so pungently identifiable that only a few bars of accordion and clarinet conjures aural images that are both refreshingly foreign and comfortably familiar. It is music that lacks a self-conscience, it can be performed seriously, joyously, in satire, or complete jest and it retains its fundamental grace and power. In a testament of this global village, the Danish Klezmer band Mames Babegenush ("Mom's aubergine salad" in Yiddish, go figure), produces a progressive brand of Klezmer that never loses its foundations, becoming a musical farce or cliché.

Founded in Copenhagen in 2004 by a group of like- minded friends, Mames Babegenush began playing Jewish weddings, bar mitzvahs and other local celebrations. The band's music was traditionally Klezmer in the beginning, morphing into a larger, more encompassing realm as the members played together. Incorporating closely related elements of Gypsy music and then American jazz by way of Le Hot Club de France, Mames Babegenush forged an organic sound with the momentum of life. "Isortok Nights" is like an early awaking on a cold morning, hinting at the oncoming day, full of sweetness and the unknown. Clarinetist Emil Goldschmidt summons four seasons of tones from his instrument while saxophonist Lukas Rande introduces the more western elements to the songs.

"Moldavian Trainspotting" brims with jazz and dance. It is like the 21st Century is spliced into pre-war Europe when things were still good. "A Glezele Yash" is a beautiful, melancholy prayer propelled by Goldschmidt into a funeral march. Bo Rande plays a mean flugelhorn and pocket trumpet. The disc concludes with the lengthy "Fantasi for Trommer, Strygere & Harpe." Percussion driven (expressing Latin influence). The piece develops slowly, illustrating exactly how far the band pushes the perimeter of Klezmer to incorporate may cultures, all fragrant with fecund growth and potential. This is joyous music even when it is not.