BY NENAD GEORGIEVSKI
March 8, 2015
Sign in to view read count 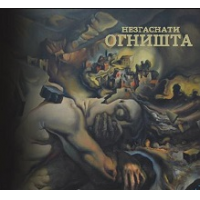 With the privately commissioned record "Nezgasnati Ognista" (Unextinguished Hearths) Olivier Josifovski, multiinstrumentalist and band leader of band Ljubojna, adds another chapter in his illustrious career. Even though this project may not bear the name Ljubojna on the cover sleeves, it was recorded with many musicians that are part or were of it, so in a way, this is its "undercover record."

Some artists are inspired by musical legacies and traditions, but choose to work strictly within the confines of those traditions, never straying from the self imposed boundaries. This is not necessarily bad or wrong at all. On the other hand, there are artists whose work is inspired by traditional music, but infuse the final outcome with various other sounds and instruments in order to breathe new life and bring the songs to more contemporary ages. Ljubojna easily falls into the latter category by making excursions into various kinds of traditional Macedonian music and enriching these songs with subtle sounds of jazz, ambient or chamber music. Taking part in this endeavor is Ljubojna's singer and Josifovski's spouse Vera Milosevska. She sings lead vocal on eight out of ten songs. The remaining two vocals are sang by another vocalist, Elena Hristova of band Baklava.

Josifovski is a talented musician and experienced producer and it shows in the assured sound of an album that allows strong and imaginative interpretations to breathe. Far from the festive and upbeat feeling of the Ljubojna Brass Fantasy record, (Bajro Zakon Cooperation, 2012). Nezgasnati Ognista has a more contemplative and occasional mournful feel to it that resembles Steve Tibbets' masterpiece Cho. (Hannibal Record, 1997) Over the years, as band Ljubojna matured and changed from a record to a record, Miloshevska has grown into a majestic mistress of many moods. She traverses a wide range of moods, from confident, celebratory and jubilant to more austere, gentle and mournful meditations. As a singer and front-woman she presides over the musicians with regal confidence and hints of joy and humor. Her singing captures the emotion of songs that surprise with their range and deftness.

Creating a 21st century album that is still able to deal in an original and moving way with the very big, interesting and touching subjects of human emotions is a trick that many folk musicians have tried to pull off but very few have been able to achieve in the impressive way that Miloševska does on this record. The choice of songs is very interesting and the key subject is love in its many disguises. Opening with "Parahodot," a song first made famous by the late great singer Nikola Badev, it is a sad lament that sets the overall contemplative mood on this record. Parahod is a paddle steamer which symbolized the economic migrations that have been causing tidal waves of economic workers working abroad. It is a mournful song that reflects the horrors of people parting with loved ones to work abroad due to economic upheavals that never seem to seize in the Balkans.

Some of the songs come from the very core of Ljubojna's repertoire such as "Tvoite Oči Leno" (Your Eyes Lena) and "Mori Čupi Kosturčanki." (The Maids of Kostur) These have become staples of the band's live repertoire and have taken many shapes and rearrangements over the years. The slowed pace versions with its chamber jazz feel somehow exemplifies both joy and sadness in these songs with its soulful singing and quiet fire. "Mitrevica Čakalkata" and "Turi Majko Turi" have an elegiac and almost tragic feel to it, and over the sparse arrangements Vera powerfully puts her own stamp and emotional authenticity. "Ogreala Mesečina" (The Moon has Risen) has a Cuban son feel to it with its playful combinations of various guitar, ukulele and banjo lines by Bojan Petkov and gently propelled percussion (courtesy of the late percussionist Oscar Salas) only to be augmented by a brass section which adds a certain Motown feel to it. Josifovski employs the talents of dozens of musicians to flesh out his ideas, but Nezgasnati Ogništa never feels cluttered or less than intimate. Supported by a characterful group, whose core members have collaborated in various configurations within the ensemble or outside, their range of experiences and talents open new perspectives on this program of songs. They create a seductive sonic world to let oneself float into.

The other singer, Elena Hristova has a singing style that is in contrast to Miloševska's as is more nasal and rural. These two complement beautifully on the almost fragile "Ajde Pominuvam, Zaminuvam." (I'm Passing Through and I'm Leaving) This song is beautifully and sparsely adorned by Josfiovski's percussion and Dave Wilson's gentle saxophone to create an otherworldly experience that is so alluring in its fragility. But Hristova's singing on "Belo Lice Ljubam Jas" is unconvincing and limited, as she uses a singing technique that is inadequate to the song's playful melody and feel. This interpretation is a hindrance to the album's overall feel. On the other hand, her singing on the closing track "Jano Mori" is full of emotion and originality.

What Josifovski has done on Nezgasnati Ogništa is to produce an utterly compelling musical synthesis by recording traditional Macedonian songs and then weave them into various layers of sounds and ambiances that truly emotionally move and captivate the imagination. Nezgasnati Ogništa is folk music for the modern age.