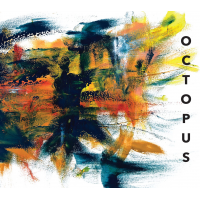 Combining discrete notes with splashes and collages of sound, the music of pianists Kris Davis and Craig Taborn on Octopus showcases improvisational prowess at the highest levels. The live recording challenges listeners with electric and sometimes jarring compositions that appear to send shards of musical light in every direction.

Davis provides two compositions for the album and Taborn three. In addition, the pianists cover two tunes, both by keyboard players—Carla Bley's "Sing Me Softly of The Blues" and Sun Ra's "Love in Outer Space."

Taborn chose to name his three compositions "Interruptions." The first, "Interruptions One," begins subtly enough with a lyrical abstraction. There's almost a tripping effect, as the notes splatter into ripples and spread out. As the music progresses, a more frenetic abstraction arises—think Cecil Taylor here—and the chords become more weighty and ponderous. The tune ends with a hopping back and forth between the pianos.

"Interruptions Two" emerges from Bley's "Sing Me Softly Of The Blues." Like a Cubist painting, the Bley tune is deconstructed and put back together in an unsettled disorienting manner. When Taborn's "interruption" enters, one piano explodes across the keys while the other states single notes paired with adroit pedal work. The music takes a spatial turn. The piano chords become more forceful and full throated. Single notes announce a grand orchestral climax. Then a repetitive note materializes above subtle explorations. Are we in a dream? The music becomes more forceful before sliding into the ether.

"Interruptions Three" begins as a blues abstraction. While one pianist contributes chords structured around an unusual time meter, the other races along with Taylor-like explorations of notes. The stutters and starts of one are embellished by the other's roving adventures.

Davis offers two compositions, "Chatterbox" and "Ossining." Both display fascinating interplay between the pianists. "Ossining" incorporates almost a binary approach as the pianists exchange "data." The highest keys on the piano are broached and the composition revolves and spins in a circular motif. "Chatterbox" incorporates more Cecil Taylor-like booms, swirls, plops, twirls and trills. The pianists race around each other, creating great splashes of sound. The listener feels pinned to the back of the seat of this musical roller coaster. The roller coaster slows at the end and its musical passengers may exit the car.

The album concludes with a gentle performance of Sun Ra's "Love in Outer Space." There is an impressionistic and romantic feel to the music and, as it progresses, the music develops a Latin rhythmic impulse underneath the melody.

No doubt the music on Octopus is dense and complex. But Davis and Taborn elicit a vocabulary that is both challenging and "in the moment." Their stream of consciousness improvisations are both ear and mind bending. They have thrown down the musical gauntlet. Are you brave enough to pick it up?