Accent: In This Together 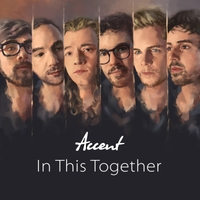 The a capella and instrument-accompanied jazz vocal ensemble format has a robust presence in the genre's history. Vocal groups such as The Four Freshmen, The Hi-Los, Swingle Singers, The Manhattan Transfer, Take 6, and the L.A. and New York Voices and others all added wonderful material to the canon (and also significantly influenced Pop genre groups such as The Beach Boys and many others).

Accent is a six-member, all-male a capella vocal group. It is comprised of vocalists from several nations—four tenors, a baritone, and a bass voice—who, up until In This Together, had not recorded in the same place at the same time. Previously, the group leveraged the power and utility of the Internet via file sharing to record their first effort ("Here We Are," Self-produced, 2015).

In this Together is an excellent and effervescent six-selection album, offering impeccable jazz vocalizing and hip arrangements that are peppered with lush, sophisticated voicings (a voicing is an arranging term defined as how a chord is structured harmonically). The six-voice format offered by Accent allows the fine arrangers here—all group members by the way —to embellish the ensemble's textures in perfect synchronicity with the lyric and rhythmic content. The combination of arranged textures and vocal brilliance is what makes In This Together glow bright.

"Aux Aurores" opens and sets the tone for the session with a haunting, lyricless meditation that sucks one in like a tempting Sea Siren. "Just Wondering" proceeds in a more modern, electro-pop-flavored direction with a catchy, syncopated hook that builds into a climax. "Love Is Just That Way" swings and doo-bops quicker, thicker, and hipper over a driving snap/clap-track and booming bass. "Twilight" is a hauntingly beautiful ballad melody that is classically-tinged with poetic lyrics and corresponding cascading and dense harmonies. "Who You Are" is 6/8-metered, almost medieval-flavored effort that pulses and offers a powerful release and a neat modulation (i.e., change of key) climax. "Only One Love" is a more harmonically and rhythmically complex— and very funky—finale with both potent and portent lyrics to close the session. The half-dozen by this half-dozen leaves one wanting more and more.

While the individual and ensemble vocals on In This Together are absolute knockouts, it is the ensemble's group chops, that is, its ability to deliver the tight, very sophisticated jazz voicings with all of the swing, flair and facility of jazz instruments—that make the album shine. Recently, none other than Quincy Jones personally invited Accent to record the jingle for his QWEST jazz video subscription service and trumpet great, Maestro Arturo Sandoval has also recently duetted with them. Those are two killer imprimaturs, don't you think? Well, In This Together certainly gets mine, too.

Aux Aurores; Just Wondering; Love Is Just That Way; Twilight; Who You Are; Only One Love.

Title: In This Together | Year Released: 2018 | Record Label: Self-Produced

Accent CD/LP/Track Review Nicholas F. Mondello In This Together Self-Produced