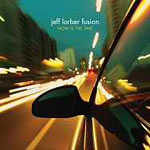 Only a handful of pioneering musicians can adapt the perception of fusion jazz into a contemporary mindset and make it palatable. With the release of Now Is The Time . Keyboardist Jeff Lorber demonstrates why he has maintained his stature and reputation, while producing music which is easy on the ears and accessible to a broad audience.

Now Is The Time represents a reinvention of Lorber's original musical trajectory, culled from his early catalog but given a fresh approach and identity. For his new version of the Jeff Lorber Fusion group, the keyboardist recruits bassist Jimmy Haslip and drummer Vinnie Colaiuta, joined by guitarists Paul Jackson Jr. and Michael Thompson on alternating tracks. Vocalist Irene B penned the lyrics to the four selections on which she is featured, and contributes a soulful element to the production, notably the opening "Rain Dance/Wanna Fly," (with Randy Brecker on flugelhorn) and the sultry "Sugar Free."

Now Is The Time offers a variation of tempos for nice conceptual listening, the songs flowing seamlessly from one to the next. This seems to be the intention of Lorber as producer, and stays true to the tradition he established early in his career. The recording could easily fall into the popular or smooth jazz category, and there is nothing wrong with that. Lorber states that he wants to "bring fusion back, with a twist," and with Now Is The Time, the keyboardist has clearly accomplished his objective.