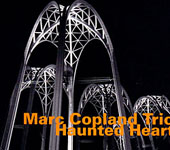 Originally released in 2001, Marc Copland's Haunted Heart deserves re-examination and re-evaluation, as hatOLOGY brings one of the perennially undervalued pianist's most sublime trio recordings back into print. With the original subtitle—And Other Ballads—removed, those familiar with Copland's intimate approach will already know what to expect, especially with a trio that, in the early part of the 21st century, was Copland's most consistent line-up.

Copland works less regularly with drummer Jochen Rueckert these days, but this first trio encounter with bassist Drew Gress—their first recorded collaboration being Second Look (Savoy Jazz, 2006), with guitarist John Abercrombie and drummer Billy Hart; a quartet recently reformed for Another Place (Pirouet, 2008) and expanded to a quintet with the addition of saxophonist Dave Liebman on Five on One (Pirouet, 2010)—was of particular importance. It introduced a marvellously effective stylistic conceit that Copland would repeat on subsequent hatOLOGY releases, including the career-defining solo disc, Time Within Time (2005): choose a particularly meangingful song, and use multiple solo takes to bracket other material in the program.

In this case, Copland delivers three very different, yet consistently dark and brooding readings of the old Sound of Music chestnut, "My Favorite Things"—made famous in the jazz world by John Coltrane—to set up two mini-sets that combine other songs popularized by the late saxophone giant, as well as a subtly Latin-esque look at Sting's "When We Dance," a series of well-heeled but here equally distinctive standards, and one Copland original.

Copland turns the ambling swing and simmering intensity of Coltrane's "Crescent" into a hushed, romantic showcase for his impressionistic harmonic approach; rarely resolving in a direct way, Copland instead deals in ambiguous implication. Coltrane also covered the traditional English tune "Greensleeves," but the "sheets of sound" saxophonist never sounded this spare, this economical...or this hauntingly lyrical. Copland's own "Dark Territory" fleshes out the first "set," revolving around a three-note bass pattern that shifts harmonically, but acts as a rallying motif throughout this perfect example of the pianist's three-way empathy with his band mates; Rueckert's understated brushwork, a definitive combination of gentle pulse and kaleidoscopic color; and Gress' thematically oblique feature surpassed only by his unerring support for Copland's softly stated solo.

The second set collects a number of often covered standards, with the trio's take on Mal Waldron's enduring "Soul Eyes" one of the best on record. The trio's approach to time is fluid and pliant, so when it begins to swing more decidedly than anywhere else on the disc—with Copland into some of his most assertive and overtly virtuosic playing of the set—it creates a dramatic high point, without breaking free of the disc's overall subdued tone.

It's hard to beat Copland's subsequent New York Trio Recordings series on Pirouet, where the pianist teamed with three different trios to explore the intimacies of the format. Still, though he'd been working with piano trios for nearly two decades when Haunted Heart was released, it's where this modern mainstreamer's greatest growth began and, consequently, is well-deserving of return-to-print status.