By Gina Vodegel
December 1, 2011
Sign in to view read count 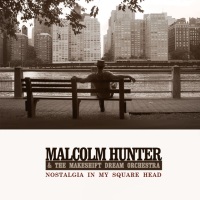 Every once in a while an album emerges that, in its final form, only seems to touch briefly on the full story behind its inception. Nostalgia in My Square Head is one of those albums. Songwriter/keyboardist Malcolm Hunter may not be known to the public at large as a musician and blues poet, but he has trodden the streets of New York—Brooklyn and Manhattan in particular—as an entertainer since his childhood days in Queens.

The sound of the city is what comes across loud and clear in this 12-piece collection of songs and sound-bites. Hunter surrounds himself with what he describes as the Makeshift Dream Orchestra, including Steely Dan alumni Jon Herington (guitar) and Michael Leonhart (trumpet), but also guitarist Jamie Fox, drummer John DiGiulio, bassist Michael "Tiny" Lindsey and other fine session musicians who have earned their stripes along their respective ways.

It's no coincidence, the Steely Dan connection. Although Hunter more than admits the influence of The Dan's music, in addition to his classical piano training when growing up, this project primarily embodies the reflection of his own experiences in the city of New York. Nostalgia in My Square Head is not an homage to Walter Becker and Donald Fagen, for Hunter already paid his dues when he released the EP WUNDerground Radio (Malcolm Hunter Records, 2000) with the song "Like a Steely Dan Movie." If this is an homage, it's one centered around Charles Mingus, whose "Nostalgia in Times Square" appears as a pièce de résistance, with a subtle and tasteful arrangement that breathes Hunter's sense of the city. Tom Smith masters his saxophone in a way that would most certainly please Stan Getz aficionados, while Hunter's "5:30 Bounce" prelude and an underscoring presence throughout Mingus' classic set the tone perfectly.

There's funk, there's gospel, there's scat and there's a lot of genuine jazz to be enjoyed here. Hunter's narrative concept is highly entertaining and his obvious keyboard chops shine occasionally, while his vocals skirt around the danger zone, morphing from storyteller to modern times crooner, with a hint of Frank Zappa in "Invisible Man." As a bandleader, he lets the members of his orchestra take plenty of leading roles and present themselves as outstanding musicians or vocalists. "Snow in Hades" is yet another unintentional homage, this time about singer Phoebe Snow who, in the 1990s, appeared in an underground concert where guitarist Eric Clapton was expected. For both vocalist Melissa Hamilton and Hunter, this song acquired special meaning when Snow passed away in April 2011, only a couple of months before Hunter's planned release of Nostalgia in My Square Head. Trumpeter Rob Henke excels with ease, adding to Hunter's sounds of a city that never sleeps.