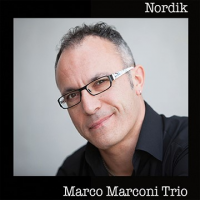 From the opening of Nordik and the first track "Too High Don't Fry" the prodigious talent of Marco Marconi is clear. The theme is quickly established and then worked on by not only the rapacious delight of the piano but the rhythmic bass line and percussion which underpins the melody. Enzo Zirilli delivers a drum solo in the middle section which provides real contrast to the busy relentless speed of the rest of the number. The title track "Nordik" follows and this is a slower, mellow theme, led by the piano and supported by the other musicians. The beautiful, atmospheric theme rolls up and down, leading to a marvelous improvised section from Marco with the others following the piano's lead. It develops from its sonorous beginnings into a trilling, up-beat sound which shows Marco's skills on the keys. His fingers work at breath taking speed, working up to the climax, when it ends with a decisive chord.

The third track is the trio's take on Thelonius Monk's "I Mean You" and this is given is given a unique treatment with the familiar theme re-worked and developed into a track which he trio make their own. "UK Journey" is atmospheric, slower and has a heavy middle section supported by a constant, driving rhythm. "Blizzard" is a delightful number, worked around another strong theme which is developed, exchanged between the instruments and creates a musical to and fro which is intrinsically engaging. This is followed by an interpretation of Paul Desmond's "Take Five" which re-invents the tune, starting with a strong, driving percussion from the piano, before the main tune is introduced. Marconi delivers the familiar riff at breakneck speed, with both hands working independently yet creating one of the most musical interpretations and developments of this tune. There are introduces riffs, ripples and extra chordal developments over the tune, making it an incredible musical interpretations and development of the tune.

"Photos in Regent's Park" is a total contrast to its rushing, busy predecessor and includes a beautiful bass solo from Andrea Di Biase. "Sunside" is gentle and wistful, creating an atmosphere of calm before Ellington's "I Got It Bad" which is another unique take on a standard. "Pecan Girl" is a rippling, rolling excursion up and down the registers of the piano, Marcon's fingers working their dextrous magic and solos form bass and drums before "Better With You" which is gentle, beautifully structured and delicate. The album finishes with a delivery of Scott Joplin's "Maple Leaf Rag" which from start to finish is the highlight of the album. Staccato notes introduce the theme which is delivered at breath taking speed, the notes almost bumping into each other. It is a rendition of which Marconi is justifiably proud and this is incredible playing: fast, furious yet each note discernible. Wonderful.

Every listen of this album reveals a little more and the speed and dexterity of Marconi's fingers as well as the interpretations of the tunes are exceptional. Three amazing musicians, great arrangements and note perfect delivery make this CD incredibly listenable time after time. The recording was made at the Fazioli Concert Hall in Venice, Italy. Marco Marconi studied classical piano and jazz at the Music Conservatory of Perugia. He has played in Italy and Europe, at the Cheltenham and Lancaster Jazz Festivals and now resides in London. Percussionist Zirilli has played has played at The Vortex in London and hosted at Ronnie Scott's and worked around the world with great musicians including Enrico Pieranunzi, Gloria Gaynor and Tom Harrell. Andrea di Biase studied classical double bass at the conservatory of Milan and the Guildhall School of Music in London. He has played with Stan Sultzman, Norma Winstone, Pete Saberton and Asaf Sirkis amongst others.

Too High Don’t Try; Nordik; I Mean You; U.K. Journey; Blizzard; Take Five; Photos in Regents’ Park; Sunside; I Got It Bad; PecanGirl; Better With You; Maple Leaf Rag.