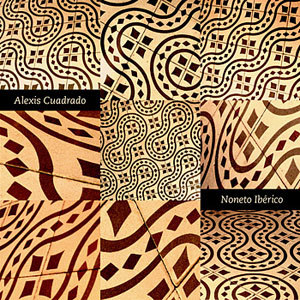 Bassist Alexis Cuadrado imparts his vernacular as a composer in Noneto Ibérico, a nine-movement work commissioned by The Chamber Music America-Doris Duke Foundation's "New Works" program. With a potent nine-piece band that includes Alan Ferber, Avishai Cohen - Trumpet, and others, Cuadrado puts a fresh timestamp on Spanish Flamenco and modern jazz with writing in the vein of contemporary composers such as Guillermo Klein.

This crosspollination of idioms has been covered in numerous recordings, yet Cuadrado's insight fleshes out some unique ideas. Each movement is based upon a flamenco song-style called "Palo," which can incorporate varied yet distinct tempos and form variations. Traditional forms are respected yet exploited in intriguing ways: the bassist's resonating bowed solo at the intro of "Very Well," placed before the Fandango's melody kicks in; the striking Alegrías rhythmic pattern in "Tocar Y Parar," intermingling swing and signature changes; or the adventurous Gauchoism in the 17-minute "Por La Minima," which interlocks minimalism and a "Bulerías" palo.

The charts are complex yet accessible, at times surprising, and executed to the fullest with moments that embrace the call-and-response of quick horn bursts, punctuated guitar licks, and nimble keyboarding. "Sólo El Sol Sale Siempre Solo" is like a sinister tale of punk rock meets free jazz, and gels quite nicely as Brad Shepik's craggy guitar trades with Loren Stillman's thorny tenor, yet a Baroque romanticism permeates "A Tientas," as Cuadrado's pensive double-bass channels the airy melody.

The energy shifts throughout the movement and provokes the spirit of dance as crowned in the contagious rumba "Los Panchitos." whose brassy horn arrangement and hollow-bodied guitar vamps are propelled by infectious percussion. Noneto Ibérico reboots flamenco-jazz for the twenty-first century.