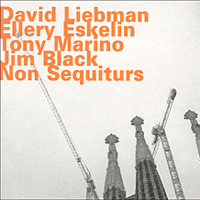 Non Sequiturs is the third Hatology release from the cooperative quartet co-led by saxophonist's David Liebman and Ellery Eskelin, following 2008's Renewal and their 2005 debut, Different But The Same. Although the pairing initially seemed surprising (Liebman is Eskelin's former teacher), the two tenors have since demonstrated an innate kinship; each is a fearless improviser, well-versed in the tradition, but unafraid to venture into uncharted territory.

Throughout the album, they alternate probing cadences and lyrical motifs with an uncanny synchronicity that belies their respective reputations—Liebman as the venerable traditionalist, Eskelin as the bold avant-gardist. Yet in fact, the saxophonists are so simpatico that it is occasionally difficult to tell them apart; Liebman himself once stated, "I can't always tell the difference myself."

Enriching their congenial rapport is the dynamic interplay of Liebman's longstanding bassist Tony Marino and Eskelin's steadfast drummer Jim Black. Their intimate familiarity with the nuances of each co-leader's approach imbues the proceedings with supple precision, even during the most abstract excursions. In contrast to the group's previous date, neither Marino nor Black contributes compositions to this studio session. Instead, the two leaders split writing duties, with their respective tunes separated into a virtual set list; Liebman's pieces occupy the first half, while Eskelin's titular suite dominates the second.

"New Breed" (drafted during Liebman's 1970's tenure with Elvin Jones) opens the record, lending new meaning to the song's title with a surge of muscular tenor salvos—a visceral aspect further amplified in an ecstatic cover of Albert Ayler's anthem "Ghosts." The amiable discourse of "In The Mean Time" provides subtle respite between the aforementioned numbers, underpinned by a sinuous modal groove.

The eight-part "Non Sequiturs" suite takes up the entire second half of the program, episodically building in intensity from the hushed unisons of "No Opening" to the rousing funk of "Adjusted Scatter." Eskelin's work requires adherence to notated rhythms, leaving pitch choices to the improvisers; the outcome is a contrapuntal web of interlocking parts designed to steer soloists away from clichéd harmonic patterns. Despite such rigorous frameworks, the final results swing with their own syncopated logic.

Non Sequiturs expands upon the conceptual inroads made in Liebman and Eskelin's previous efforts; their democratic embrace of freedom and form transcends conventional notions of melody, harmony and rhythm, yielding a highly personalized interpretation of the piano-less quartet tradition.