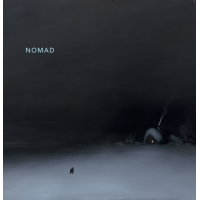 Scandinavian jazz has always found its strength in its musicians like Jakob Bro, who is a guitarist and has worked with such names as Bill Frisell but is also band leader in his own right; as well as double bassist Jasper Hoiby, who leads the critically acclaimed band Phronesis while being an in demand sideman. Young trumpeter Jakob Sørensen is continuing that tradition, not only as strong player but also as a good composer. The album Nomad is his second project as a solo performer, following Bagland and is a four track offering which may seem a little light in terms of music however it is a vinyl release and, in this format, less works well.

Nomad sees Sorensen reunited with Alex Jønsson on guitar, Mathias Jaeger on piano and Frederik Sakham on bass; the only new addition being Andreas Skamby on drums. The tightness of the band is clearly evident throughout, from Jaegar's driving piano beat complimented by Sorenson's trumpet on the opening track "Eick," to Sakham's commanding bass playing on "Nomad." Every song reveals the pureness of Sorenson's playing supplemented by each member of the band, with no one musician dominating. The musicality of each is first class and shows how mature Sorenson is in his playing as, with each track, his sound gets better and better, employing different techniques to enhance the music.

Sorensen's mastery of composition is revealed: every song sounds so simple, yet sophisticated, like a game of chess. He utilizes the entire band's full potential. If a comparison is to be made, then it would be with Chet Baker but Sorensen has a style in his own right and he his keen to emphasize this here. With this release, Sorenson is fast becoming the master of Nordic Ambient Jazz.

If Bagland introduced Sorensen to the world then Nomad reinforces his standing as the new bright star of this form in the world of jazz. His exceptionally strong, cohesive band is fully committed to Sorenson's vision and therefore able to contribute to his particular, unique style with ease and great success.

A jazz broadcaster who likes to discover new players and interpretations of the genre from different parts of the world.