BY DAN BILAWSKY
April 17, 2017
Sign in to view read count
It's not exactly a secret that Anat Cohen is smitten with the music of Brazil. Her clarinet is a key voice on the Choro Ensemble's albums, she's peppered her own dates with the work of Milton Nascimento, Chico Buarque, Luiz Bonfa, and Hermeto Pascoal, and she made the rounds in New York clubs—and on a pair of tracks from Luminosa (Anzic Records, 2015)—with a feisty crew dubbed Choro Aventuroso. She's an Israeli by birth and a New Yorker by address, but her soul may very well belong to the southern oasis that birthed choro, samba, baião, bossa nova, and a bevy of other rhythms and styles of music. These complementary dates make that point, adding up to one brilliant bonanza of Brazilian music from one of the greatest clarinetists of our time.

This intimate jewel finds Cohen's clarinet and Marcello Gonçalves' 7-string guitar wrapped up in the work of one of Brazil's greatest composer-arrangers—the late Moacir Santos. Gonçalves took Santos' scores and arranged/reduced them to fit this duo, reframing these songs while retaining the allure—or duende, if you prefer—endemic to the originals. Making this happen was no small musical feat, as there's quite a bit going on in Santos' compositions, but these two make it look easy.

Moods and mannerisms vary here, but good chemistry remains a true constant. "Amphibious" utilizes unison lines and twining gestures in service of painting excitement, "Coisa No. 1" holds onto sportive sentiments while traveling on a cooler flow, "Outra Coisa" has an intoxicating rhythmic and melodic standing that proves potent, and "Coisa No. 6" appears as a picturesque starry night coming into its own. Further highlights include a somewhat frolicsome "Nanã (Coisa No. 5)," a "Mãe Iracema" that moves from uncertain beginnings into a hip and catchy groove stream, and a mournful "Paraíso" that wouldn't have felt out of place on Cohen's Poetica (Anzic Records, 2007). A dozen Santos tunes in total are given over to investigation here, and not a one carries a wasted thought. 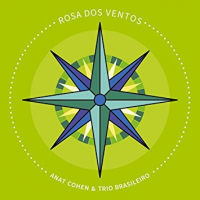 This album serves as the sequel to Alegria Da Casa (Anzic Records, 2015)—the first on-record meeting between Cohen and the combination of percussionist Alexandre Lora, bandolim whiz Dudu Maia, and 7-string guitarist Douglas Lora. Those three, collectively known as Trio Brasileiro, share Cohen's loves for choro and experimentation, making them an ideal match for her clarinet. Together, all parties blend festive, folkloric, and foreign sounds into one dynamic package that's a worldly step beyond their aforementioned debut dalliance.

Respect for traditions and a thirst for new influences both equally inform this work. It's simply impossible not to smile at the way that knowledge carries the day without restricting the freedom to roam into different territories. Cohen's frisky clarinet, dancing and prancing over a bustling pandeiro accompaniment, does as it pleases on the invigorating "Sambalelé"; Indian mysticism makes an appearance, formed around a buzzing drone and the exotic explorations of Alexandre Lora's hand pans on the intriguing "O Ocidente Que Se Oriente"; salsa spices the mix of "Das Neves," adding another layer of possibility to music of hybridization; tranquility plays a part in the program, exemplified by the soothing "Lulubia"; and spirited choro, of course, has its day as this grouping brings the irresistible excitement of the music to bear on "Choro Pesado."

This is definitely the more adventurous of the two programs under discussion here, but neither one outdoes the other in the grand scheme of pleasurable listening. Cohen's magnetism and musicality, married with the accents of Brazil and the skills of her accomplished colleagues, makes for something incredibly special on these dates. Add both of these albums to the glowing list of recordings in her discography.