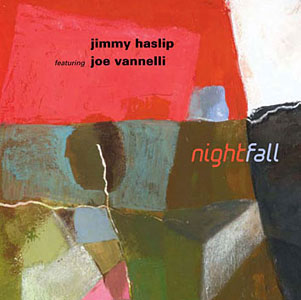 Electric bassist Jimmy Haslip hasn't had a prolific solo career, Nightfall being his third release in eighteen years, since his debut, Arc (GRP, 1993). Haslip's energy has mainly been devoted to the Yellowjackets, the band he co-founded with pianist/keyboardist Russell Ferrante thirty years ago—a milestone celebrated with the release of Timeline (Mack Avenue Records, 2011), which finds Haslip and the band in truly fine form. That the Yellowjackets has overshadowed Haslip's solo career is unsurprising, though Haslip has also distinguished himself in guitarist Robben Ford and Allan Holdsworth's bands, in addition to amassing numerous credits as a producer. Nightfall reunites Haslip with keyboardist/producer Joe Vannelli, who also collaborated on Haslip's Red Heat (Unitone, 2000), and explores rhythmic and melodic terrain quite distinct from the Yellowjackets.

Nightfall covers a fair bit of ground, from Latin-inspired grooves , pulsating Afro-Cuban percussion and slick fusion, to soul-pop and the decidedly smooth—though the laidback, breezy "On Sunday" could yet give smooth jazz a good name. The music was recorded over four years, and much of it is programmed. This tends to produce a slightly repetitive feel in several of the tunes, particularly the faster-paced numbers, where driving rhythms are to the fore; then again, this strategy works very well on "The Third Man," where programmed bass dovetails most effectively with Haslip's purring lines. Haslip's playing is excellent throughout, and his distinctive tone, guitar-like melodic lines and core lyricism underline how much a part of the Yellowjackets sound he's been since '81.

Haslip's collaboration with Vannelli goes back to the late '70s, and the tunes here are all co-written. Vannelli's Rhodes and synthesizers color much of the music, though he also impresses on piano. A horn section of tenor saxophonist Bob Mintzer, alto saxophonist Steve Tavaglione and trumpeter Wayne Bergeron gets swallowed up somewhat by synthesizer on the grooving "Empath" and "Xango," though Mintzer imposes himself on "Casa de Oro,"" with his customary energy and elegance; Tavaglione does likewise on soprano on "The Third Man." The former song shows Haslip's Puerto Rican roots, and the salsa groove and driving timbale and bongos of Jimmy Branley evoke the Fania All Stars, though Haslip's playing conjures up guitarist Pat Metheny's lyricism. Haslip's delightful variations on a five-note bass motif are particularly inspired on the atmospheric "The Third Man."

The title track features lush orchestration, a delightful harp contribution from Stella Castellucci, and some sympathetic accompaniment from Mintzer to Haslip's soulful grooves. "Deep Water" boasts an impressive vocal from Lori Perry, and gospel-tinged backing vocals from Sharon, Darlene and Carolyn Perry. This anthemic song has serious commercial radio potential, though perhaps it's just a little too good for that, these days. The aforementioned, smooth "On Sunday" features a fine Rhodes solo from Vannelli and brings a highly melodic collection of compositions to a sunny conclusion.

It may have taken a while to birth Nightfall, but it has been worth the wait. Haslip though, really should do this sort of thing more often.