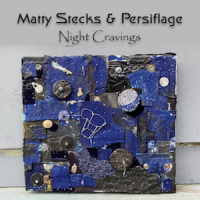 Like sneaking into the boy's room for a smoke, bassist Dave Ambrosio intros both Night Cravings, the concept and title track, with a sinister ease, sparking a slow burning fuse that once lit, ain't going out until all in attendance damn well reach accord. Or don't. Either/or, it's a spilling energy not unlike the frisson encounters of Keith Jarrett's storied, 70's American and European quartets. That alone makes Night Cravings well worth your investment.

New York is not the place to be if you can't hold your own, which is why each of these guys has no qualms razing their own path through saxophonist Matthew Steckler's (Stecks) grizzled allusions. Referencing again said 70's quartet, Steckler's sound is a brazen wallop that immediately invokes the surge and blur of Dewey Redman and/or Jan Garbarek in their brash, pioneering flights. Adding their own instigative humor to the deconstruction of previous thinking, the cutting swirl of trombonist Curtis Hasselbring, investigative guitarist Todd Neufeld and the elastic emotionality of drummer Satoshi Takeishi gamely follow Steckler into the brink of a rousing and routing bout against margin and genre.

Hearing the walls come down in "Night Cravings" as the quartet ricochets around Avatar Studios is a cool listening experience. With Grateful Dead-like meanderings they fall head first into a swing through rock, giving "Do The Betty Rubble" its own particular dance. An irreverent, martial spin through the eyes of John Philip Souza lights up "Agriturismo." "What Seems Eternity In Salem" quiets things down, allowing the quiet to create its own flow of melody and structure. Steckler's' flute on the flighty "Scene Change" may just conjure for some Jarrett's own moves from piano to flute, and there's nothing wrong with that. Same goes with Night Cravings.