By Jack Bowers
November 7, 2013
Sign in to view read count 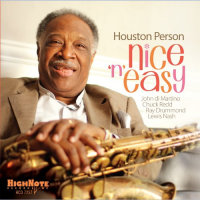 Even though Houston Person isn't, strictly speaking, a "Texas tenor"—he hails from Florence, SC—the crafty veteran hits the mark in almost every other respect, from his clear and powerful sound to his unremitting propensity to brighten a melody and to swing under any and all conditions. On his latest album, Person, still marshaling all the right notes at age seventy-eight, is said to be taking it Nice 'n' Easy, but that's anyone's guess, as he makes what he does sound easy no matter how intense or heated the surroundings.

While the spotlight shines brightest on the leading man, his supporting cast should not be overlooked, and Person has assembled a superior team for this largely even-tempered session, starting with the tasteful pianist John di Martino and including (on several tracks) vibraphonist Chuck Redd, the reliable bassist Ray Drummond and drummer par excellence Lewis Nash. Di Martino, Drummond and Nash have been Person's backup trio of choice for several years, and in tandem with Redd they see to it that the leader's every step is beyond question nice 'n' easy. It's good that Person is a charming balladeer, as half the songs on offer ("All My Tomorrows," "It's All in the Game," "If It's the Last Thing I Do," "Ill Wind," "Sweet Life") abide in that realm. Person unsheathes the luster in each of them, as he does the more hurried numbers ("Someday You'll Be Sorry," "Stolen Sweets," "Nice 'n' Easy," Let's Fall in Love," "Bluesology").

While nothing here is less than admirable, the standards by Harold Arlen and Ted Koehler ("Ill Wind," "Let's Fall in Love") are especially engaging, mainly because they are simply marvelous compositions. On the other hand, it's hard to find fault with any of the others, in particular Sammy Cahn / Jimmy van Heusen's "All My Tomorrows," Alan and Marilyn Bergman's "Nice 'n' Easy" or Milt Jackson's "Bluesology" (like those Texas tenors alluded to earlier, Person has always been a bluesman at heart).

Those who have heard Houston Person before will know pretty much what to expect from Nice 'n' Easy; those who haven't are in for a pleasant ride. Even though Person never strays from conventional norms, neither does he undervalue the music or its import, lending every tune the full measure of his attentiveness and ardor.

Someday You’ll Be Sorry; All My Tomorrows; Stolen Sweets; It’s All in the Game; Nice ‘n Easy; If It’s the Last Thing I Do; Ill Wind; Let’s Fall in Love; Sweet Life; Bluesology.