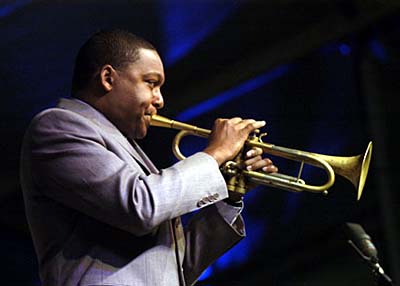 slideshow
The event was simply billed as “Willie Nelson Sings the Blues," but the historic two-night stand on January 12 and 13, 2007 at Jazz at Lincoln Center was far more than that. Call it a summit meeting between two American icons, Willie Nelson & Wynton Marsalis, two of the most significant figures in modern-day country and jazz, who discovered common ground in their love for jazz standards and the blues. Their performance stirred the sounds of New Orleans, Nashville, Austin and New York City into a brilliantly programmed mix that was equal parts down-home and cosmopolitan, with plenty of swing and just a touch of melancholy. To say that these shows were a hot ticket would be an understatement. Luckily, the tapes were rolling and the results of this unique collaboration now constitute the Blue Note album Two Men With The Blues for everyone who couldn't cram into The Allen Room.

Nelson's appearance was the highlight of the aptly named 2006-07 Singers Over Manhattan series, which Jazz at Lincoln Center produced and set against the breathtaking backdrop of The Allen Room. The venue, at Columbus Circle in New York City, features a two-story glass wall behind the stage, so that artists perform in front of a classic New York City nighttime tableau: taxis streaming around Columbus Circle, the lights of Upper East Side apartments beyond Central Park, and the moon rising over it all. Assembled before this ever-changing backdrop were Nelson in his elegant southwest regalia; his longtime sideman, harmonica player Mickey Raphael, dressed for the occasion in a suit and tie; and the always suave Marsalis, with his quartet pianist Dan Nimmer, bassist Carlos Henriquez, drummer Ali Jackson and saxophonist Walter Blanding.

Their recorded set opens with the gussied-up honky-tonk of “Bright Lights Big City," and it has an almost cinematic flair; says Marsalis, “We're like the big city meets the country. Mickey is the sound of the train....and we're like the car horns." There's ample room for solos, allowing everyone a chance to step out; Raphael's wailing harmonica segues into Marsalis's trumpet lines, which he plays at a slightly more measured tempo before turning the spotlight over to Blanding. It all winds up with lively, boogie-woogie piano and bass thumping before Nelson steps back up to the mic. It was that kind of gig: a clearly well-rehearsed ensemble effort that nonetheless had an air of spontaneity, congeniality and fun. For his smoky intro to the second track, “Night Life," Marsalis shifts everything down into a blues-ballad mood; Raphael contributes a high-and-lonesome harmonica solo and Nelson gives the lyrics a ruminative, lived-through reading. “Caledonia," up next, is often played as an all-out big band rave-up, but Nelson maintains his considerable cool and the band follows suit, illustrating that an arrangement can become all the more exciting when it percolates just under a boil.

The New York Times critic Nate Chinen noted the “playful tone" between Nelson and Marsalis, who, Chinen wrote, “played his trumpet with terse, unforced authority...He was pushing toward a vocal quality, singing through his horn. Mr. Marsalis also sang with his voice, on a version of 'Ain't Nobody's Business' that quickly turned into a buddy duet. 'I hear you,' Mr. Nelson said sympathetically during a roguish verse by Mr. Marsalis. It was a moment evocative of the banter between Jack Teagarden and Louis Armstrong."

But, Chinen added," the concert's most transcendent moments conveyed more of a quiet ache. They were 'Stardust' and 'Georgia on My Mind,' a pair of Hoagy Carmichael standards that Mr. Nelson long ago personalized. He sang them both with a forthright intimacy, as if telling a cherished bedtime story. And the band was right there with him, emphasizing how the blues are as much a feeling as a form."

Says Nelson, “These songs, heard this way with this group--that's never been done before. Whatever I'm doing, if you put Wynton and these guys around it, that brings it up to a different level." Among the other tracks featured in the set are Nelson's own “Rainy Day Blues" and renditions of Spencer Williams's “Basin Street Blues" and Clarence Williams's “My Bucket's Got a Hole In It." That one features an exuberant arrangement redolent of New Orleans brass bands, with an extended percussion break and great vocal repartee between Nelson and Marsalis. The group climaxes the set with the high-spirited gospel groove of “That's All." Judging by all the exuberant hoots and hollers from the crowd, the band was truly testifying; listeners at home should feel free to join in, as long as the neighbors won't mind.

Last fall, when the 74 year-old Willie received the BMI Icon Award at the organization's annual Country Awards, Kris Kristofferson declared, “As a performing artist, there will never be anyone like him. Like Muhammad Ali, like Johnny Cash, he's become more than the art form that made him famous." Marsalis would certainly agree. As he remarked during the rehearsals for the show, “The first thing about Willie is his integrity. He's been traveling up and down the road all these years on his bus. He's like the last of a certain breed of musicians."

With his “outlaw" persona, Nelson changed the face of country music, and then reached well beyond it to attract a multi-generational audience among followers of jam bands, classic rock, blues and jazz. Explains Nelson, a GRAMMY Legend recipient, “Labels were invented to sell the music. You had to know what to call it before you could sell it. So they called the blues the blues, called the jazz the jazz, bluegrass, gospel, whatever...Some music encompasses it all, so what do you call that? And that's pretty much what I like to play."

The virtuosic Marsalis, as erudite as he is hip, has built his own remarkable career in both jazz and classical music. A winner of the Pulitzer Prize and multiple GRAMMY awards, he is Artistic Director of Jazz at Lincoln Center. He has served as a jazz historian, educator and a mentor to many younger musicians, and he has long honored the musical traditions of his native New Orleans. Like Nelson, though, Marsalis has not merely upheld tradition; he's expanded upon it and continues to explore it within a modern context. This live collaboration with Nelson was sparked by Marsalis's belief that the blues should be our national anthem. He's clearly found the perfect artist to help him make his point. What better voices than Nelson's and Marsalis' to represent the land of the free?