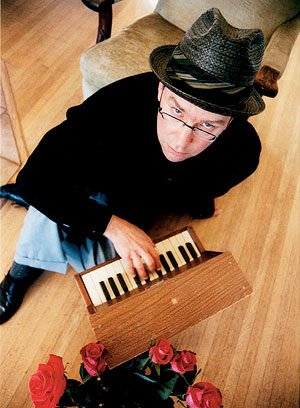 University of the Streets is proud to announce the commencement of its Curators Series at their 75 seat Muhammad Salahuddeen Memorial Theatre on October 2nd. University of the Streets is a not-for-profit community organization established in 1969 which advocates for established and developing artists & musicians in the metropolitan area by assisting them to grow and succeed. The organization located at 130 East 7th Street, in the heart of the East VIllage provides training, arts and theatre support to artists in the organization's Art, Music, Multimedia & Performance Theater while extending the opportunity to develop, perform and exhibit their talents within an arts-supportive environment. We envision and construct our schedule of events and programs to effectively support a comprehensive range of ages, views, lifestyles and economic ranges, providing individuals the means to interact, grow and experience world class art and music.

The newly established curated series of concerts has been structured so as to provide audiences with the largest music concert and community supported venue to date mounted in the East Village. All are welcome. The series which is slated to commence October and run throughout 2011 will be held at the Muhammad Salahuddeen Memorial Jazz Theatre located on the second floor of their facilities located at 130 East 7th Street (corner of Avenue A). The first month of this inspired series kicks off Saturday October 2 at 8 p.m. and is being curated by the talented American Composer, Keyboardist and Producer Mr. Wayne Horvitz, whose impressive background includes having performed or recorded with John Zorn (whose advocacy and assistance regarding this series we gratefully acknowledge), Fred Frith, Philip Wilson and Carla Bley; his having produced for Fontella Bass, Eddie Palmieri and who has composed music for choreographer Paul Taylor and the full length score for renowned PBS program “Chihuly Over Venice." Mr. Horvitz has also provided original compositions for and collaborated with noted film maker Gus Van Zant.

Amongst the exciting, innovative and visionary talented musicians and band members that will be performing during Mr. Horvitz's October curation are: gifted French horn player Vincent Chancey (whose played with Sun Ra, Lester Bowie, Aretha, Melba, Peggy Lee, Chick Corea, Diana Krall & Elivis Costello amongst others); noted Drummer Kenny Wollesen (whose performed or toured with Nora Jones, Sean Lennon & Tom Waits); respected New York based Saxophonist, composer and sound artist Briggan Krauss; Ches Smith American musician working in Concrete, Gothic and Jazz idioms whose primary instruments are drums, percussion, and vibraphone; Multi-instrumentalist & guitarist Elliot Sharp as well as musician Anthony Coleman pianist, keys player, trombonist and vocalist whose work within the free improvised & avant-garde jazz scenes in downtown New York helped push forward modern Jewish music into the 21st century. Also appearing will be the up and coming drummer Harris Eisenstadt performing with the band “Woodblock Prints" and Doug Wieselman on clarinet and loops. Also appearing during the month will be a number of important women composers and improvisers: specifically critically acclaimed Pianist, composer, singer and songwriter Robin Holcomb who will be performing with Tony Scherr on acoustic and electric bass and guitar; Gina Leishman Multi-Instrumentalist and Music Director lauded by Time Out NY as “one of New York's most versatile composers"; Sara Schoenbeck inspired bassoonist and interesting composer and pianist on the rise Angelica Sanchez appearing with Chad Taylor on drums, Greg Ward on alto saxophone and Sean Conly on bass. On the 11th, 18th & 23rd one of the highlights of the series presented and entitled “Voices of the Future" will showcase up and coming & formidably talented new music artists originating from America's Northwest-Seattle area now emerging onto the NY scene. The “Split Stream Big Band" concert will be a high point showcasing the “Voices" talents of amongst others: Riley Mulherker, Andy Clausen, Chris Icasiano and Neil Welch. The much anticipated “young Voices" appearances provide added and clear momentum both to the UOTS lineup for October and to these wonderful musicians as detailed in Sunday's August 29th's NY Times Music section Lead Article: http://www.nytimes.com/2010/08/29/arts/music/29seattle.html_r=1 citing Seattle's Alt-Rock hub which will now also be extending its' purring Jazz to East Coast aficionados presented at what is quickly becoming a TOP & refreshingly accessible Manhattan Venue: University of the Streets' Muhammad Salahuddeen Memorial Jazz Theatre. The series also will be presenting other large orchestra events such as the extraordinary Kenny Wollesen's “Himalayas" on the 5th and the exceptional & sure to be a joy New York Composers Orchestra 25th Anniversary Event taking place on the 23rd and who will also be playing the Guimares Festival in Porto in November and Milano in April. These meticulously curated series of concerts will prove October to be a significant, wonderfully brillant and exciting month for sure!

The curator for November is Matana Roberts. Chicago born and bred, Matana Roberts is an alto saxophonist/composer/performer who works in various mediums of improvised sound and performance, and has been active in New York since 2001. A Vanlier and Brecht Forum fellow, as well as a 2008 and 2009 nominee for an Alpert Award in the Arts, she has appeared as a collaborator on recordings and performances worldwide with her own ensembles as well as with a variety of collaborative ensembles—such groups as Sticks and Stones, Burnt Sugar, Exploding Star Orchestra, the Oliver Lake Big Band, the Julius Hemphill Sextet, Myra Melford's Happy Whistlings, Jayne Cortez's Fire Spitters, Merce Cunningham Dance, and Savion Glover Dance. In 2008, the success of her leader debut, *The Chicago Project* (Central Control International), led critics to call Roberts “one to watch" (Kevin Legencre, *Jazzwise*) and “an eloquent, dramatic, tone warping free jazz artist right out of Ayler's anti bop tradition." (John Fordham, *London Guardian*) She has also recorded as a side woman on recordings with a large smattering of influential post rock ensembles such as Godspeed You Black Emperor, TV on the Radio, Savath and Savalas, and Thee Silver Mount Zion. Website: http://www.matanaroberts.com/

November's line-up starting November 1st at 10 p.m. commences with Bill McHenry, a widely acclaimed Saxophonist, composer and bandleader will be here every Monday night in November. His release “Roses" on Sunnyside was voted one of the Top Five albums of 2007 on two NY Times lists. Nate Chinen music critic for the New York Times laude's Bill's quartet saying “Jazz at its best is always both old-fashioned and modern, and the saxophonist Bill McHenry is a good example. He plays with unabashed enthusiasm for melody: no mazes of harmony or time signature here; the warm, sweet lines ripely tumble out, dictating the bands rhythm..." also pointing out “Throughout his gorgeous and uncompromising record the tenor saxophonist Bill McHenry threads his melodies as if through a fabric. He's confident enough to let his band mates the insinuative drummer Paul Motian, the venturesome bassist Reid Anderson and especially the ingenious guitarist Ben Monder shape the songs as they desire.

Amongst the musicians heading concerts in November will be Hill Greene who plays acoustic, electric, upright electric and fretless bass&#151as well as piccolo. He is the bassist and Music Director for Jimmy Scott and The Jazz expressions; Mazz Swift, gifted electric violinist. Singer, lyricist and composer; Andrew D'Angelo whose charismatic presence and iconoclastic musical ambition is well-established over the course of his twenty year plus career on both the New York and international scenes; Tomas Fujiwara, drummer and composer whose group “The Hook-Up" are cited as “insightful and invigorating" in the Times April, 2010; Steve Swell inspired trombonist, composer and educator; Allan Chase saxophonist and leader of the Allan Chase Trio and Quartet; Mike Pride who works in Nu-Jazz, Experimental and R&B music and has played with Anthony Braxton and toured with punk legends MDC; AND Qasim Ali Naqvi composer, percussionist and sound designer of Nu-Jazz, Ambient and Experimental music.