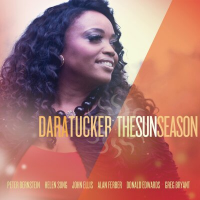 slideshow
Jazz vocalist and songwriter Dara Tucker will celebrate the release of her new CD, The Sun Season, at New York's Smoke Jazz Club (2751 Broadway) on Wednesday, August 20th. The sets will feature pianist Helen Sung, guitarist Peter Bernstein and drummer Donald Edwards, who also appear on the CD. The third of Dara’s studio releases, The Sun Season is a celebration of life, energy and the human experience though the eyes of a unique singer and composer.

Dara Tucker’s The Sun Season differs from her previous releases, ‘Soul Said Yes’ (2011) and ‘All Right Now’ (2009), in that ten of the twelve tracks that comprise this offering are Dara’s original tunes. Tucker’s writing is filled with memorable melodies, rich harmonies and strong rhythms. These sensibilities are immediately felt on such tunes as “Sometimes Love," “Beautiful Sun," “The Sun Suite" and “See It Always." Her gift of balladry, as evidenced on “Naïve", and “The Nearness of You," one of the albums two covers, reveal a mature singer with the wisdom to communicate the tender essence of love with a flair that is distinct and enveloping.

“The singer-songwriters of the 60’s, 70’s and 80’s were hugely influential on me, as were gospel and the Great American Songbook. What I end up producing as a writer is essentially an amalgam of all these genres. Couple those influences with one of the baddest New York jazz ensembles around, and you have the ingredients that came together to make up “The Sun Season”.

During her brief career, Dara Tucker has already managed to catch the ear of some of the most significant figures in jazz such as vocalist Cassandra Wilson, organist Dr. Lonnie Smith and saxophonist Benny Golson. Within the last two years, Tucker has won audiences on such stages as The Blue Note (NYC), Smoke Jazz Club (NYC), Snug Harbor (New Orleans, LA), The San Jose Jazz Festival, Sculler’s in Boston, MA, The International Festival of Arts and Ideas, New Haven, CT, Nighttown in Cleveland, OH and the Oklahoma Jazz Hall of Fame.

Peeling away the layers of her diverse background sheds ample light on her unorthodox path to becoming a significant contemporary voice on the vocal jazz scene.

“I grew up singing gospel in church with my brothers and sisters. There were 7 of us, so my father (an accomplished music minister) and my mother (also a singer) had a built in choir. We traveled a lot, and we would back our parents up everywhere we went. I learned tons about harmony before I was even in the first grade. That provided me with amazing ear-training very early on. My father, a minister, didn’t allow secular music in the house. But eventually, when I began to come of age, I started to explore the sounds of big band music and the Great American Songbook. I spent many nights with my radio tucked under my pillow, surreptitiously soaking in artists like Rosemary Clooney, Ella Fitzgerald and Sarah Vaughn."

Tucker says writing the songs that make up “The Sun Season” was an organic process. After writing furiously for more than 7 years, she knew it was time to make her own statement. “I'm excited to share this project with everyone, and I look forward to performing the material in concert. It's my statement on what jazz is to me in the here and now. I am thankful to have been given the opportunity to shine a light on the particular Space that I choose to occupy in my singular Sun Season."