Tony Adamo's "What is Hip?" CD 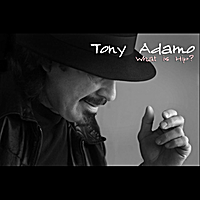 slideshow
Strokeland Jazz is proud to welcome Tony Adamo's new CD, What is Hip?. On this follow-up to his 2007 release, Straight Up Deal, Adamo shows a maturity and depth that puts him firmly at the top in his trademark cool-jazz style.

Recorded and mixed at some of the finest studios in the world, including Capitol Records in Hollywood, the audio quality is absolutely stunning. The songs benefit from the expert ears of Grammy-winning engineer and producer, Al Schmitt, along with other world-class engineers and producers, including Erik Zobler, Ed Cherney, and Jerry Stucker. Not content to merely cover classic songs by Tower of Power, The Beatles, and other great artists, producer Jerry Stucker guides the project with class and creativity to turn these songs into something completely new, yet comfortably familiar.

The recording of the song “What is Hip" on Adamo's new CD came from a suggestion made by the legendary horn player and Tower of Power co-founder, Stephen 'Doc' Kupka. During a recording session with Adamo and his producer/guitarist, Jerry Stucker, Doc suggested several TOP songs that Adamo might want to cover.

Adamo chose “What is Hip" and “This Time its Real." Kupka, along with jazz great Eddie Henderson hold up the horn section on Hip. In the re-grooved This Time Its Real, Mic Gillette, funk icon in his own right, wrote the horn arrangement and plays trumpet and trombone along with TOP member Tom E. Politzer on tenor sax. Politzer plays tenor sax with Doc Kupka on baritone sax.