Musicians love her lithe brush and cymbal work, supported by an iron core of time and groove. --LA WEEKLY 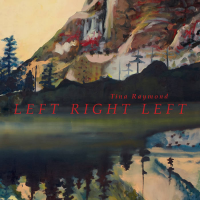 The CD will be available April 7th on Orenda Records and at the CD release celebration on Thursday, April 6th at 9pm (PDT) at the Blue Whale, 123 Astronaut E S Onizuka St #301, Los Angeles, CA 90012. $15 cover, tickets available at the door only.

Raymond says, “I found the subject matter of these songs to still be incredibly relevant—an equally comforting and frustrating realization. On the one hand (let’s say the left), it’s comforting to know our experiences are not historically unique. On the other (now the right), it’s frustrating to see we have not learned from our past mistakes.”

A significant and powerful song on the record is Joni Mitchell’s “The Fiddle and The Drum.” Written in 1969, the lyrics, “And so once again oh America my friend, and so once again you are fighting us all. And when we ask you why, you raise your sticks and cry, and we fall…” echo a current global sentiment toward the United States. Raymond asserts, “World leaders express distrust in American governance, and relations are unpredictable. America, it seems, has once again become the iconic bully at recess trying to take everyone’s lunch money.”

Also on the record is James Weldon Johnson’s “Lift Every Voice and Sing,” a song associated with the African American Civil Rights Movement and commonly referred to as “The Black National Anthem.” “The lyrics, ‘Sing a song of faith that the dark past has taught us, Sing a song full of the hope that the present has brought us…’ still resonate” says Raymond. “Although it has been 100+ years since the song was written, Americans still do not share the same civil rights and deplorable racism persists in parts of our country. America has not learned all of the lessons from its dark past, and we should recognize that fact. I am hopeful that collectively America will stand up to these injustices and march toward progress.”

Raymond conceptualized Left Right Left in December 2016. “I was with my family for the holidays, and it seemed that every dinner conversation turned into a political discussion,” Raymond recalls. “I come from a family of teachers and union members, and my father is a labor lawyer. The inevitable transition of power gave us a lot to talk about. I shared an article written by Barbara Kingsolver with my grandmother (a retired English teacher) that encouraged creative people to ‘join the time-honored tradition of artists resisting government oppression through our work’ and was compelled to make music with that essence.

Art Lande called on Christmas to say hello, and I approached him about making a politically motivated record with me. He was hesitant at first, and didn’t want to make anything anti-America. He encouraged me to select songs that had positive messages, and to view current collective political engagement as healthy. I spent the following weeks researching and arranging songs and curated a list that spans a time period from the civil war, through the depression, the progressive movement, and the Vietnam war. I had also been playing with Putter Smith a lot, and realized that he and Art had not collaborated before. This project was a perfect opportunity to bring two of my favorite musicians together, and I am excited for people to hear the result.”

Raymond's thoughtful arrangements include “The Battle Hymn of the Republic” over an atonal bass line, Woody Guthrie’s “Pastures of Plenty” in mixed meter, a melancholy adaptation of Guthrie’s “Union Maid”, a minimalistic version of Joan Baez’s “Saigon Bride”, Pete Seeger’s “If I Had a Hammer” in the style of a jazz standard, and an avant-garde rendition of Joni Mitchell's “The Fiddle and The Drum". Additionally, Lande’s clever arrangement of “America the Beautiful” and Smith’s provocative original compositions, “Xxmas as Baghdad” and “White Flight” complete the album.

Raymond writes, “I am so grateful for Art Lande and Putter Smith’s wisdom and insight while working on this record. They reinforced how important and special it is to be musically honest— and to do so unapologetically.”

“The Los Angeles jazz scene has been coming on strong in recent years and Tina Raymond is right in the middle of it.”—Working Drummer Podcast