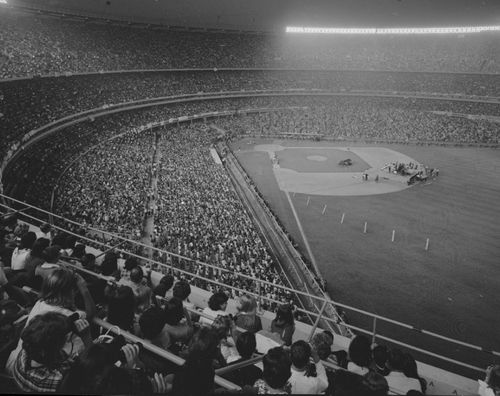 slideshow
Fifty years ago on Aug. 15, 1965, the Beatles performed at New York's Shea Stadium. The Mets were in Houston playing the Astros that weekend, and the Fab Four appeared before a full house—55,600 fans, mostly screaming teenage girls. In today's Wall Street Journal (go here), I write about the concert—not about how the music was drowned out by the hysteria but how the event kick-started the sexual revolution and the rock concert business.

When the Beatles took the stage at second base, they were terrified. But it wasn't stage fright. Since October 1963, when Beatlemania began, the Beatles had been mobbed by adoring teens, and the crush over time had grown increasingly greedy and grabby. What was most frightening were the lengths to which teens would put themselves at risk to mob John, Paul, George and Ringo. The thought of thousands of fans pouring onto the field and overcoming the police was a real possibility, and John was most uneasy.

At the time, the concert featured the largest concert audience ever assembled in the States, and tour that followed marked the first time a rock band played major stadiums and arenas. Elvis had played much smaller stadiums in a 1957 tour but nothing like the venues that sold out to see the Beatles.

Even Mick Jagger and Keith Richards were at Shea Stadium behind the first base dugout. They also were in the Beatles dressing room for a time. They had been sailing on Long Island Sound when they decided to attend. What they witnessed certainly had a bearing on how they charted the Rolling Stones' future in the mid-1960s. They also became painfully aware of the uphill battle they faced trying to replicate what the Beatles had achieved. And htey were right. It would be three years before the Rolling Stones would be popular enough to play large arenas.

But perhaps even more of a game-changer was the cultural impact of the Shea Stadium concert and 16-day tour. When the Beatles headed home to Britain on Sept. 1, 1965, they left behind a transformed America. Post-Shea, the youth culture had much more marketplace power—and what teens wanted and how they wanted it now mattered to companies trying to reach them en mass.

In addition, the concert inadvertently started the sexual revolution. Girls didn't just love the Beatles in 1965—they wanted to marry them. As for a generation of boys, they begged parents for guitar and drum lessons and began to realize the power they had in the presence of girls.

I was 9 in 1965 and I lived in Manhattan. While I didn't go to see the Beatles at Shea Stadium, I probably would have if I had had a sister. What I do remember vividly about that summer was the universal passion among girls and boys for all things British. London was imagined as a fun, frolicking place done up in bold colors, much like Mary Poppins or My Fair Lady. For boys, secret agents and spies were all the rage, largely a result of Bondmania. Goldfinger had been a big hit and Thunderball was due in the fall. TV was awash in shows like The Man From U.N.C.L.E. and Secret Agent. There were secret agent toys, comics and board games, and all had a British connection. On the radio, British artists such as Petula Clark, Herman's Hermits, the Rolling Stone, Tom Jones and many others had hits. I wanted to go downtown to meet Mrs. Brown's lovely daughter and seek satisfaction, whatever that meant.

Something that happened to me in 1965 finally became clear after researching and writing my WSJ essay. Back then, kids in school said I looked like John Lennon, thanks, I suppose, to my squinty eyes. My best friend Glenn looked like Paul. We didn't notice but the girls in our class did. One day, I began getting bags of trinkets left on my desk from a girl named Wendy. It wasn't one bag but a daily bag of stuff, most Beatles items like a pen with all four heads on it, a big white button that said, “I Love John," notes and other stuff.

I had no idea why she was giving me all of this. When my mother found out, she called the girl's mother, and I had to give back all the stuff, which I didn't mind, since I didn't really want any of it. Of course, Wendy never spoke to me again.

For years after, I always thought Wendy was just out there or desperate for friendship. But after writing the Beatles essay, I finally realized what all the fuss was about. The Beatles had switched on things in girls that hadn't been activated before, and Wendy was trying to express that. Today, of course, I wish I had kept that bag of Beatlemania. It would have been a terrific childhood time capsule and a reminder of a time when girls my age lost their minds.

JazzWax clip: During my research, I found what I suspect is The Beatles at Shea, a documentary on the concert that was aired only once in 1967 on ABC. I'm not certain since I've never seen the documentary. Dig what happens at 46:36, after A Hard Day's Night. A girl who jumped on the field avoids the police several times before the police caught up with her. The crowd booed when she was grabbed, and Paul McCartney playfully booed along with them. John Lennon flips and gets in Paul's face—giving him a “Knock it off" glare. It's one of the rare adult looks by John trying to reel in Paul. Here's the Beatles at Shea...