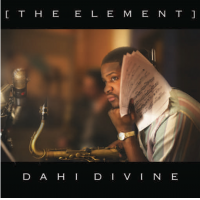 slideshow
The list of notable jazz artists who where born, raised or have resided in Philadelphia is extensive and includes such legendary masters as Benny Golson, Jimmy Heath, Lee Morgan, John Coltrane, Jimmy Smith, Sonny Fortune, Archie Shep, McCoy Tyner and Sun Ra as well as today’s keepers of the flame like Christian McBride, Jaleel Shaw, Terrell Stafford, Tim Warfield and Orrin Evans. One can add to this illustrious lineage a young man at the forefront of the latest generation of jazz musicians to emerge from the City of Brotherly Love: Tenor saxophonist, composer and bandleader Dahi Divine.

Divine, who has already started paying his dues and honing his chops in the crucible of the New York City jazz scene, will be a few months shy of his 23rd birthday and in his final semester of jazz studies at The New School For Jazz & Contemporary Music when he releases The Element, his recording debut as a leader, on April 7, 2015. Featuring all-original material, the self-produced album heralds the arrival of an emerging artist remarkably well-versed in the modern jazz idiom whose command of his craft displays a level of virtuosity, eloquence and maturity as both an instrumentalist and writer that belies his age. Divine is joined on the album by the core unit of pianist Brett Williams, bassist Anton DeFade and drummer Justin Faulkner who has been his friend since high school. Alto saxophonist Albert Baliwas appears as a guest on two tracks and singers Sedric Perry and Dacia Kings appear on another on lead and background vocals, respectively.

Divine penned the music on The Element from 2011-2013 while studying composition during his first two years at college and the songs have been developed and refined in performance since then. Their genesis can be traced back to his early attraction to jazz and West African music as a child that was nurtured over the ensuing years by studies of both genres and of Afro-Cuban jazz with, among others, Larry McKenna, Stafford, Shaw, Joel Frahm, Bobby Sanabria, Reggie Workman, Myron Walden and Yosvany Terry.

“My goal for this recording was to feature arrangements interweaving jazz melodies and harmonies that had specific West African rhythms underlying them,” Divine recalled. “The very first instrument I played was an African drum while attending an after-school program when I was six years old. I didn’t pick up the sax until I was 10 or 11 and started out on alto before switching to tenor when I was 15,” he explained. “In addition to jazz, I heard a lot of classic soul music at home through my parents and my big brothers were into hip-hop but I’ve been around West African music all my life. There are a lot of dancers in my family,” he added. “My sister ran a dance school where she taught West African dance among other styles. More recently I studied West African chant and classical saxophone with Yosvany at the New School. The main things I looked for when selecting musicians for this recording were how well versed they were in jazz, spiritual and gospel music and also how familiar they were with West African grooves,” he continued. “Brett has such a strong lyrical presence on piano; you can really hear the influence of soul and gospel in his harmonics,” Divine said. “Anton holds everything down with a rock-solid bottom on bass and Justin is the perfect catalyst on drums – he’s able to maintain momentum, move things forward and light a fire under everybody when necessary!”

Divine’s interest in jazz grew after he bought a used tenor saxophone he’d found at a shop in South Philadelphia for a few hundred dollars. “I’d been listening to people like Trane and Pharoah Sanders before I started playing sax,” he recalled. “After I got the tenor I became much more interested in music and really immersed myself in my studies. That was when I discovered Wayne Shorter and Sonny Rollins who also became major influences.”

The album leads off with its title track and right from the start one hears the various stylistic elements that inform Divine’s writing as well as his and his bandmates’ playing. Rather than having one central pulse to focus on, “The Element” features several textural variations on a common theme that climax and change in energy according to which player one happens to be listening to. “Love Tap To The Solar Plexus” is a metric tune that, in addition to sections with four beats per measure, has one in 15/8 clearly influenced by West African rhythms. “The Assasin,” the nickname Faulkner received upon joining Branford Marsalis's band, is a modal composition in the spirit of mid-1960s modern jazz classics like Coltrane’s “One Down, One Up” and McCoy Tyner’s “Four By Five.” The progressions and harmonies of “Night Is Near” pay tribute to Wayne Shorter whose music Divine not only learned on the sax but also on the piano; one hears echoes of “Children Of The Night” at the beginning of the tune and elements of “Speak No Evil” are quoted at the end. “Ajna” is inspired by Divine’s interest in Hindu practices and teachings; the word is sanskrit for the Third Eye Chakra of intuition and intellect. “Griot’s Tale,” one of the most popular songs in Divine’s repertoire, is a tribute to his father.

What’s noteworthy about The Element and what sets the album apart from those being produced by other young lions today is that although the music is deeply rooted in, and demonstrate’s Divine’s deep respect for, the trailblazing work of the tenor titans who came before him, his compositions are far from derivative of this tradition but rather move it forward and take it in new directions. This is a rare quality to find in a musician at any stage of a career, let alone at the onset of one.

Born in Philadelphia on July 10, 1992, Dahi Divine is a member of the 2015 class of the New School of Jazz & Contemporary Music in New York City which he attends on scholarship. He began his musical education with some of Philadelphia’s most distinguished jazz musicians and programs such as the Settlement Music School, the Kimmel Center, the Philadelphia Clef Club of Jazz and the Mt. Airy Cultural Center. While attending public school Divine earned several awards as a member of the All City Jazz Band under the direction of Terrell Stafford. In addition to leading his own quartet which performs at such venues as Chris’s Jazz Café in Philadelphia and Small’s in New York, he has shared the stage with James Moody, Jimmy Heath, Charles Fambrough, Monnette Sudler, Arturo O’Farrill, Kenny Burrell, Jeremy Pelt and Ira Sullivan, among others. In February 2010 he performed in the horn line of the Dave Matthews Band during the 52nd Annual Grammy Awards in L.A. having been selected from a pool of 800 auditions submitted from around the US. That July, during the NAACP's 32nd annual ACT-SO competition during its 101st National Convention in Kansas City, MO, Divine was awarded a gold medal for his composition “Choices.” In addition to his acoustic jazz work, Divine co-leads an urban contemporary project featuring original music influenced by Hip-Hop, jazz and R&B.