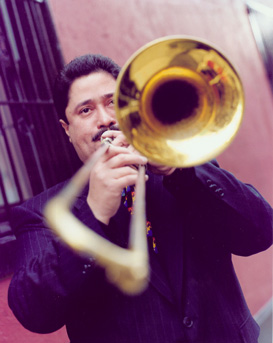 slideshow
THERE was a time when Papo Vazquez, an Afro-Puerto Rican trombonist, did not understand jazz.

Blame it on John Coltrane, whose classic 1961 album, “Live at the Village Vanguard,” landed in Mr. Vazquez’s record collection when he was 14.

“That was the second jazz record I ever owned,” Mr. Vazquez, 51, said at his apartment here. The first was J. J. Johnson’s “Blue Trombone.”

Jimmy Purvis, a trumpeter Mr. Vazquez met in the North Philadelphia neighborhood where he grew up, had given him both albums.

“That first record he gave me blew my mind,” Mr. Vazquez said. “Then he gave me Coltrane, and I put it on and I said, ‘What is this? I better start studying.’

“I had high esteem for Jimmy. He was my man, you know? I looked up to him. So I said, I’m going to give him the benefit of the doubt. I’m going to understand this.”

And so he did.

Outside jazz circles, Mr. Vazquez — voluble, rotund and given to belly laughs and salty language — is mostly unknown. Even in Westchester, his home turf, Mr. Vazquez said, he has yet to make a musical dent. But among aficionados, though, his reputation is as outsize as his personality. “They call me Mr. Bomba Jazz,” he said.

Bomba is a drum-heavy Puerto Rican rhythm. Mr. Vazquez, who moved to Bronxville with his wife, Edelina Figueroa de Vazquez, in 2000, began experimenting with it in a jazz context decades ago, after a childhood influenced by a bevy of music-loving Puerto Rican aunts and uncles and full immersion in the island’s native sounds.

Shuffling between Philadelphia, where he bought his first trombone at 13 (a friend’s brother sold it to him used for $5), and Puerto Rico, where he lived for years, Mr. Vazquez developed an ear for all kinds of music, including R&B and salsa.

By the time he was in his midteens, though, Latin jazz became a calling. At 17, he was playing “with the best bands in Philly,” he said.

In his 35-year career — much of it spent in Yonkers and the Bronx while the Vazquezes, who have been married 26 years, saved money for their move to Bronxville — Mr. Vazquez has played with Dizzy Gillespie, the Ray Charles Orchestra, Tito Puente, Wayne Shorter and other jazz greats.