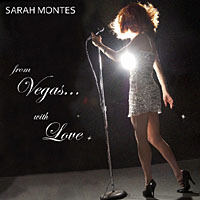 slideshow
From Vegas With Love, re-establishes a musical sound reminiscent of the 1940's and 50's suggesting similarities to Cole Porter, Peggy Lee, Doris Day Louis Armstrong and Glenn Miller; combined with cosmopolitan lyrics that are delightfully amusing, engaging, emotionally intimate and some times spicy with persuasive feminine charm. The songs themselves are candid and mature. Sarah's voice expresses her true love for singing and delivers moments of vulnerability that are undeniably delicious!

Once again reuniting with long time friend and multi-Platinum producer Keith Olsen, Olsen produced five of the cuts; “You Did This," “You're Breathing Down My Neck," “Love Goes," “Matter," and “Just Add Water And Stir."

“Sarah is a jazz singer with one foot in the past (feels from the 50's) and quality set firmly in today. With over 3,000 concerts in 52 cities all over the world, Sarah Montes has earned her market." said Producer Keith Olsen.

Sarah produced the remaining five tunes and was delighted when co-writer Alan Roy Scott, brought Grammy and TEC award winning producer and engineer Ed Cherney to the project; mixing “Perfectly Perfect," “I Have A Passion For The Old Fashion," “Ba Du Ba Da Baby," “Convince Me" and “I Can I Will I Do." Brian Foraker finalized the mastering and Randy Gardner also worked with the project; engineering the songs that Sarah produced and mixing a full band version of “Ba Du Ba Da Baby" and “A Little." Both songs are slated to be released as singles in April and July of 2112.

“Sarah sings and performs with a kind of easy confidence, and plain happiness to just be on stage doing what she loves; which translates into an equally enjoyable experience for the audience...A close musical encounter of the satisfying kind." stated Alan Roy Scott, veteran hit songwriter and Founder of Music Bridges Events.

Sarah Montes: With over 3,000 performances in 52 cities around the world to her credit, Sarah is truly at home on stage. Her sassy, playful attitude combined with her natural ease and sincere passion for music creates an emotionally charged and captivating experience with the audience. Sarah has performed with numerous well known artists in varying genres such as the Jordanaires, the Guy Lombardo Orchestra, The Letterman, Debbie Reynolds, Jerry Lewis, Wayne Newton, Porter Wagner, Michael Martin Murphy, Lacy J Dalton, John Conley, Rodney Crowl, and has written and recorded with Hip Hop producer Devante Swing, Flo Rida and new comer to Suburban Noize Records, Nick Dean.