Laurence Cook is a national treasure. Why the cultural machinery would rather embrace bourgeois twaddle rather than reward Laurence Cook with a Guggenheim grant or Macarthur award or the key to the city of Cambridge is one of the more egregious betrayals of our modern day. 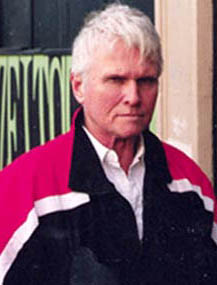 Laurence Cook is a national treasure. Why the cultural machinery would rather embrace bourgeois twaddle rather than reward Laurence Cook with a Guggenheim grant or Macarthur award or the key to the city of Cambridge is one of the more egregious betrayals of our modern day.

Cook took the drum seat after Milford Graves in the Lowell Davidson Trio. Cook was also Bill Dixon's drummer following Freddy Waits and preceding Tony Oxley—right smack dab in the middle of Dixon's Soul Note period, appearing on the 5 star releases November 1981, Thoughts and Son of Sisyphus. Those facts alone makes the Cook node one of considerable size and weight in the larger free jazz network.

Since Dixon, Cook has remained active, if sparsely recorded. Much of his activity has been in the (comparatively) rich Cambridge/Boston music scene with such fine musicians as Jacob William, Jim Hobbs and, on this recording Eric Zinman, with whom Cook has been playing and performing for over 2 decades.

With Zinman, as with Cook, there is a Dixon connection. While their time with Dixon was in different capacities (Zinman a student, Cook an employee) both profited from their exposed to Dixon's methodology, exhibited here as a mutual aesthetic and methodological reference point for their work together. Cook and Zinman speak the same language and speak with an eloquence that comes from depth and longevity of experience.

In listening to Double Action it would seem that many of those experiences informing the music were highly psychedelic ones, and that's a good thing. In This Music (a Dixonism referring to the music that supplanted Jazz as the premier art music of the day) psychedelia trumps austerity. That Cook and Zinman have broken into the world of MIDI and electronic is great news. Any expansion of their palette is welcome as their aesthetic refutes the notion “less is more."

And yet, the expanded midi palette that is also a point of vulnerability, as many of those MIDI sounds are straight out of the box, aka “general midi" or “GM" for short. Why hearing ubiquitous GM sounds annoy while hearing ubiquitous acoustic piano or drum do not is a strange contradiction. Rather than tease that out, let's instead lament that in Cambridge, home of MIT, that sound designers and end users (like Zinman and Cook) aren't actively collaborating. Zinman and Cook are living masters of the duet and they deserve better sounds.

While this is an excellent record its excellence is large part resides in what the music foreshadows. As digital technology continues to permeate every facet of our existence, Double Action will be remembered as a resounding success way back when MIDI and electronic implements were first gaining acceptance in a traditionally and predominately acoustic music.