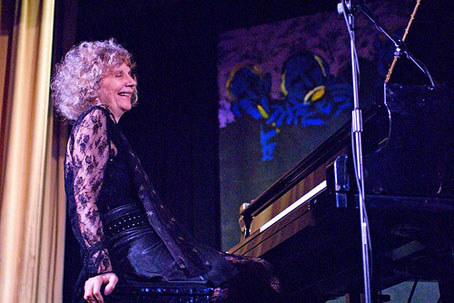 slideshow
Jazz pianist, educator, and composer Joanne Brackeen was honored with the BNY Mellon Jazz 2014 Living Legacy Award in a special ceremony at the John F. Kennedy Center for the Performing Arts on Friday, October 10, 2014. The Living Legacy Award honors jazz masters from the mid-Atlantic region who have achieved distinction in jazz performance and education.

This program is made possible through a collaboration with the Kennedy Center.

BNY Mellon is a global investments company dedicated to helping its clients manage and service their financial assets throughout the investment lifecycle. Whether providing financial services for institutions, corporations or individual investors, BNY Mellon delivers informed investment management and investment services in 35 countries and more than 100 markets. As of June 30, 2014, BNY Mellon had $28.5 trillion in assets under custody and/or administration, and $1.6 trillion in assets under management. BNY Mellon can act as a single point of contact for clients looking to create, trade, hold, manage, service, distribute or restructure investments. BNY Mellon is the corporate brand of The Bank of New York Mellon Corporation (NYSE: BK). Additional information is available on www.bnymellon.com or follow us on Twitter @BNYMellon.

Mid Atlantic Arts Foundation develops partnerships and programs that reinforce artists' capacity to create and present work, advance access to and participation in the arts, and promote a more sustainable arts ecology. The Foundation was created in 1979 and is a private non-profit organization that isclosely allied with the region's state arts councils and the National Endowment for the Arts. It combines funding from state and federal resources with private support from corporations, foundations, and individuals to address needs in the arts from a regional perspective. The region includes nine states and jurisdictions: The District of Columbia, Delaware, Maryland, New Jersey, New York, Pennsylvania, the U.S. Virgin Islands, Virginia and West Virginia.